The Ballad of Ryan Bingham 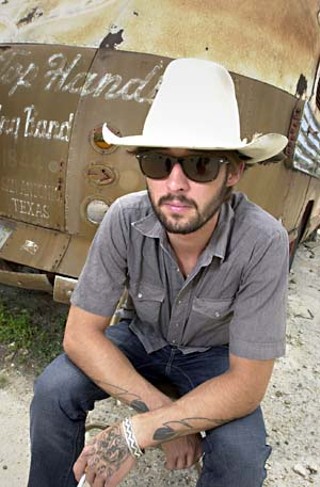 It's a smoldering summer night in Marfa, the kind that seems to linger all year long. The sign outside one shotgun saloon reads Joe's Place, but most locals call it Ray's bar. Packed to the rafters for the anniversary of Lubbock maverick Terry Allen and actress/artist Jo Harvey Allen, its celebratory atmosphere spills out into the streets.

Joe Ely and Ryan Bingham spin the tale a bit differently, but in both accounts the guest list is the same, a roundtable of venerable songwriters, including Guy Clark, Butch Hancock, Robert Earl Keen, and Allen compatriot David Byrne. Bingham hauls in a small PA system he brought with him for the occasion, and each musician takes his turn on the makeshift stage, pausing only to restock on alcohol from a gas station across the way. The music rings out well into the early morning.

"Here's Ryan, this new guy, sitting around and holding his own," cackles Ely in fond recollection. "When he plays something, you believe it. That's a very rare thing. It's not only the timbre of his voice but the way he puts words together, his choice of images. You can tell he's been there.

"He reminded me a lot of when I was first leaving Lubbock and going out into the world. We were all fascinated with his songs and his story."

Bingham is a rolling stone with a personal history that borders on West Texas mythology. Reared in a fractured, hardscrabble ranching family, he sharpened his spurs as a songwriter while seeking his eight seconds of fame on the Southwest rodeo circuit. In the time that's passed since that Marfa night in July 2006, Bingham's emerged as one of the most promising new artists around, his barbed-wire lyricism piercing deep with wisdom well beyond his 28 years.

Alongside his locally based band, the Dead Horses – multi-instrumentalist Corby Schaub, drummer Matt Smith, and bassist/pianist Elijah Ford – Bingham has blazed trails through the back alleys and crossroads of Americana. He's performed at the Austin City Limits and Coachella music festivals and soon makes his acting debut in the major motion picture Crazy Heart. With the release of his new album, Roadhouse Sun, his second effort for Nashville's esteemed Lost Highway Records, Bingham finally lives up to his own legend.

Kicked in the Teeth

Relaxing under the old water tower in the historic downtown of Gruene, Bingham exudes the casual confidence of a man who knows his hardest roads are behind him. He's the living embodiment of Thin Lizzy's "Cowboy Song," strikingly handsome, with a ranch hand's tan and a grizzled, black beard. His fraying baseball cap is tucked down low, shading emerald eyes. Tattoos of Indian feathers run down his forearms, drawing attention to the scar tissue that's built up around his right wrist, one of several physical reminders of his rodeo days.

"People say I've been on the trains since I was 12 or some shit," he laughs with a slow, Southern drawl. "That's not necessarily the case. Everything was just real scattered. There was a lot of dislocation."

The truth isn't far off. Bingham was born in Hobbs, N.M., on a 72-square-mile ranch. His family lost the property soon after and sought work in the oil fields of Bakersfield, Calif., then the rural ranching communities littered throughout West Texas and New Mexico. They spent time on the border in Laredo, where Bingham, at age 17, learned to play a few guitar chords from his neighbor and enough broken Spanish, he says, to talk his way out of trouble.

Yet, even when the dust settled in any given town, Bingham's life remained in a near-constant state of transition. He was shuffled between the households of his extended family as his parents' substance-abuse problems dictated, attending no fewer than five high schools, two of which he eventually dropped out of. Inspired by his uncle, Clay Bingham, he started riding bulls in his early teens, working his way up to the professional circuit.

"Basically you drive all night, sleep in the back of a pickup, and hope you don't get your teeth knocked out every step of the way," reflects Bingham. "Most of the time I had to try and keep a day job during the week to make ends meet. I did all kinds of stuff, working construction or on someone's ranch – building fences and herding cattle. I worked at an auto shop washing cars for a while, doing whatever I could to get by."

Bingham is about halfway through the story when it becomes apparent that his beaming white smile is composed primarily of replacement teeth.

"I got my face kicked in once," he shrugs. "It messed me up pretty good. I broke my nose, got my teeth knocked out. That was probably the worst of it. I can't even count the injuries. I broke a few bones in my hand and leg. I've been knocked out a few times. I was lucky to get out of there without being hurt too badly. During the cold months of the year I can feel it a bit more when I wake up in the morning."

The rusted glory of Bingham's years on the rodeo circuit is branded into his calloused songs. He spins deeply personal portraits of the plain truth reinforced by the road, chasing darkness on the edge of town or at the bottom of the bottle. It's more apparent in his chapped, dust bowl rasp. Bingham sounds like a man twice his age.

"Bull riding isn't that different than the life of a musician," Bingham reasoned to the Chronicle last year. "You're trying to ride an uncontrollable force. There are no rules or limits or regulations, and there's a freedom in that that's also a bit terrifying. You can learn a lot about yourself through some of those scarier moments."

Bingham was still on the rodeo circuit when he hastily recorded his debut, Lost Bound Rails, a long-gone collection of unaccompanied original material, cut at the behest of his uncle.

"I used to sit in the back of the truck, make up these songs, and play at the tailgates at rodeos," Bingham recalls. "I started printing up some CDs and selling 'em for like $5 from the truck. If we were at a bar in a small town and not many people were there, people would bug me to bring in my guitar and play.

Since getting thrown from his last bull six years ago in Brownwood, Bingham has populated just about every town in Marty Robbins' Gunfighter Ballads and Trail Songs. He befriended locals in Luckenbach, camped on the Guadalupe beside fiddler Doug Moreland, busked on the streets of Paris, France, and even crashed for a few months on Ely's couch in South Austin, amassing a suitcase full of songs in the process.

The firebrand vagabond caught the attention of Lost Highway while opening for Ely at the Cactus Cafe. His label debut, 2007's Mescalito – essentially a revision of Dead Horses, which he cut the previous year in Nashville – bucks hard out of the chute, achieving a rare balance between poignant, campfire balladry and the rockier terrain of Texas' Red Dirt scene. The album earned him a nomination for New Emerging Artist of the Year at the annual Americana Music Association Awards and was championed by Terry Allen, who deemed him, "the legitimate heir to the hard-traveling, deep-knowing likes of Woody Guthrie and Hank Williams."

"I just write about what I know and have experienced," Bingham offers in response, "the people I've met, the places I've been."

Tucked off Highway 62 in New Mexico rests the Halfway Watering Hole, a rural roadhouse 30 miles removed in either direction from Hobbs and Carlsbad. Its isolation attracts a rough crowd of cattle hands and truck drivers. The bar was once owned by Bingham's family, whose old ranch borders the property. Sepia-toned photos of their hacienda still hang from the rustic, wooden walls, while a jukebox rotates between selections from Bob Wills, the Rolling Stones, Howlin' Wolf, and the Marshall Tucker Band.

"Usually whenever we roll through that part of the country, I try to stop in there," Bingham cracks from the road, just outside Las Vegas. "It's a reminder of where I come from."

The watering hole serves as the backdrop to Bingham's new album, Roadhouse Sun, a honky-tonk masquerade of West Texas fervor and raucous rock & roll. From the restless flare of "Bluebird" to the barreling boogie-woogie "Roadhouse Blues," Bingham evokes the Black Crowes, no doubt aided by returning producer Marc Ford, who layers the album with thick electric and slide guitars at nearly every turn. His son Elijah Ford joined the Dead Horses in February of last year.

Roadhouse Sun is an album for hard times and harder drinks, with a blunt political immediacy that recalls the more vitriolic moments of Neil Young. Most of the material was written and broken in on the road. Travel-weary two-step "Tell My Mother I Miss Her So" and remorseful acoustic ballad "Snake Eyes" both premiered last year on Austin City Limits, while the rustling, dirt wheels rave-up "Country Roads" dates all the way back to his days on the rodeo circuit.

"More than anything, I think the record reflects how we play live," stresses Bingham, who until buying a house last year in L.A. lived in Austin. "When Mescalito came out, we were still just getting to know each other. Now that we've been on the road a few years, it's all coming together, one big happy family."

That much is readily apparent during the band's April 30 set for Shady Grove's longstanding Unplugged at the Grove series. The Dead Horses lock in gear behind Bingham's highway narratives and the depth of his course delivery. Midway through the performance, Ely joins in for the calling card, "South Side of Heaven," originally found on Bingham's self-financed sophomore outing Wishbone Saloon. Ely steps into the song as if it were his own, singing the words over Bingham's left shoulder:

I've been a desperado in West Texas for so long, I need a change.

For 10 long years this old place ain't seen a drop of rain.

And that wind blows everyday cold like a desert snow,

Like a lost bound train, runnin' on cocaine and out of control.

One thing's certain: Bingham's journey is firmly on track. 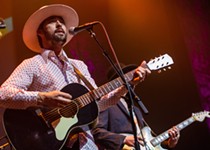 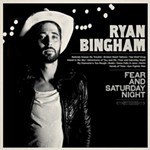