A Gathering of Tribes

Chaos in Tejas marks its territory

There's also the matter of accommodations. He's booked those, too, for a handful of hardcore punk acts from Europe and Japan, and there are similar efforts at tabulating exactly how many groups are staying at the hotel he's chosen. Images of Animal House come to mind, only with more neck tattoos.

There's a method to Hefner's madness. Over the past decade, the 28-year-old booker and promoter has brought some of the best punk and hardcore groups you've never heard of to Austin – often from overseas – as well as routing underground talent through town, putting out local bands' vinyl, and just generally being a tireless champion of punk rock. He's on a first-name basis in the local scene, one that's ebbed and flowed in the last 30 years, and a known quantity on the national scale.

True to the old-school DIY spirit, he also devotes much of his time to being a roadie for bands: Dillinger Four, World Burns to Death, Iron Age, Fucked Up, Crystal Antlers, the Strange Boys, and Signal Lost to name a few. In fact, he leaves on tour with Sweden's Skitkids the day after his festival ends.

Despite the global circumference of his schedule, Hefner shifts into overdrive for Chaos in Tejas, four days in late May that sometimes take years of planning. When Ken Sanderson, who runs San Francisco punk label Prank Records, expressed interest in doing an Austin Prank Fest in 2002, Hefner helped him put together a show. He was already booking around town and making contacts, and that festival evolved into him organizing his own the next year, casually called Timmy Fest. Every year since, the event has grown a little bigger and more eclectic, with most of last year's Emo's shows beyond sold out.

"Nah, I don't want to water down the charm," he smirks. Hefner, who moved here from Virginia 10 years ago, admits he's not real good at being bored, so promoter certainly becomes him. And by now he's an old pro: He started touring with bands when he was 17, as well as booking shows, and locally he's booked Emo's, Beerland, Red 7, Mohawk, Club 1808, and the Broken Neck.

He largely does the legwork himself, with help from his roommates, and, in true pusher-man fashion, points out that besides the music festival this weekend, there's also a punk rock photography show opening at Rio Rita on Thursday featuring Chrissy Piper, Autumn Spadaro, and more; Jack Barfield's poster-art show at the Hyde Park Parlor; Tim Kerr's monthlong art exhibit at Domy Books; and the first independent punk rock record swap at the Broken Neck, a DIY venue that's become a sort of genre outpost on the Eastside. The music's subculture may have been modified by the Internet, but Hefner's a savvy networker and knows when to seize the opportunity to bring together different scenes.

"I always want it to be more than getting drunk and watching bands," he laughs. "I know that's essentially what's going to happen anyway. I mean, I can try to get the Zapatistas to come set up a table, but, you know, there are still going to be drunken idiots."

Since Hefner spends so much time on the road, it allows him the ideal punk rock lifestyle: traveling and buying records. He remarks that his room at home is pretty much "just records, from the wall to the bed.

"It's so stupid. I sell records, but I buy just as many. Before I went to Japan, I sold 150 records, and I couldn't even notice.

"If I only knew then what I know now," he continues. "I remember going to Sound Exchange as a kid and seeing a single on the wall and going, 'That single's $75!' Now, I'd buy that single for $400."

That collector side helps when it comes to the business side of what Hefner does. He's managed to keep Chaos in Tejas sponsor-free, usually won't book a band he's never seen live, and flies in groups like Japanese thrashers Judgement for their only U.S. show on his dime, because he loves them.

"I'm totally obsessed with Japanese punk," he admits. "I've been over there three or four times and have an insane Japanese record collection. The Japanese punk scene has been bootlegged a lot, and I think they're really wary of who they trust. Luckily, I've built a good relationship with some of the people there, the guys in Judgement and some of their friends, and they've never played the U.S." So Hefner's a local punk rock diplomat, trying to keep good relations and help out some of his favorite bands that might not ever get here otherwise. Last year, he finally landed dream headliner Roky Erickson, who played Emo's for the first time and ended up dueling with ZZ Top's Billy Gibbons. Also enticed were reunited Chicago politi-punks and outside stage burners Los Crudos. In 2006, he brought in garage-punk legends Dead Moon for one of their last shows before they broke up. (Two-thirds of Dead Moon return Saturday as Pierced Arrows.) He's still holding out for Motörhead.

This year he went into the event-planning wanting four bands and got Judgement and British oi punks Cock Sparrer. The other two were Prank Records roster entry Gauze, also from Japan, and New Zealand pop cultists the Clean, which played a reunion show last summer in New York. Not bad for a guy who, when he's able, sleeps within a fortress of vinyl.

Tellingly, the fest is known both nationally and internationally, with folks driving and flying in from all corners of the country to spend four days sweating in Texas heat while decked out in leather. As much as Hefner's lived his life on the road, his faith in the hometown scene has attracted many other scene devotees. His word-of-mouth workhorse mentality proved that hitting the pavement can sometimes pay off, but he's a fan first and foremost.

"I don't think in another town Manikin could play with Sacred Shock," he states. "That's one thing I love about Austin: that weird bands can play together. This fest is not a moneymaker. I have to be stoked on the bands."

A few weeks later, I spot Hefner standing in front of Sound on Sound, the record shop on North Loop. He's dwarfed by the poster-plastered window, trying to find space for the flyer he's holding. It's funny because half of those posters are probably his.

Purchase advance Emo's tickets at www.ticketweb.com. Visit www.frontgatetickets.com for passes to other Chaos in Tejas shows. Beerland has no advance tickets. Visit www.webang.blogspot.com for more info.

Cock Sparrer: "If I have one record in my collection that's been played more than anything, it's probably Shock Troops."

Judgement: "I flew to Japan to see them. People better come see them here."

Vaaska: "They're local and don't play often. But because I'm not busy enough with this fest, I'm also putting out their 12-inch, and it rules."

Annihilation Time: "I love them always." 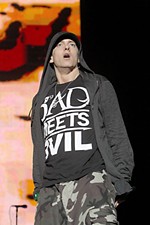 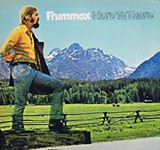