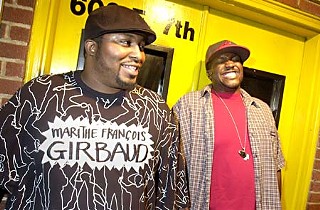 Every day they're hustlin': Crew54's Master of Self (l) and G-Christ (Photo by John Anderson)

With all due respect to the Chronicle's Wells Dunbar, nobody hustles in the ATX like Crew54. Formed in 2006, the Killeen-based duo – Master of Self and G-Christ – hosts The 54 Reality Show, a self-produced weekly Web series that captures the grime of our local hip-hop scene from the underground on up. "It's basically Crew54 all day, every day – in the studio, in the clubs, or just kicking it," spits G-Christ. Crew54 has logged more than 75 episodes to date, with many of them getting picked up by other websites around the world, including the Chronicle's new MP3 and video blog, the Next Episode (austinchronicle.com/thenextepisode). This week's installment recaps Crew54's meltdown at Creekside Lounge last Friday.

What separates the two from most hip-hop entrepreneurs is their willingness to share the lens and promote other local rhymesayers, many of which – Phranchyze, MSG Crew, Dubb Sicks, Cali Zack – are appearing at Flamingo Cantina on Friday, May 8, for the Austin Fresh Fest '09. Crew54 is giving away its debut album, Beaters & Babies, online, along with mixtape Middle Road to help build anticipation for Ghetto Rhapsody, the follow-up to the duo's Aggressive Soul. "There are a lot of talented artists out there," G-Christ concludes. "You have to have something else other than just music. With Crew54, people know we're going to give them a solid live show. We're going to promote it hard, and no matter how the show goes down, we're going to get it up [on the site] the next week. We always give credit where it's due." www.the54realityshow.blogspot.com.

The Search for a Superstar

Were it not for Simon Cowell's notorious predisposition against anything resembling country music, Kendall Beard could've been the next American Idol. The 24-year-old local songstress was the belle of season eight's ball, nearly making the coveted Top 10 with her prime-time rendition of Martina McBride's "This One's for the Girls" back in February. "People can't imagine the team that it takes to create this show, the traveling and all of the work," Beard smiles. A native of Lufkin, Beard went the extra mile to get on the program, traveling all the way to Puerto Rico last July for her audition. "Honestly, I didn't think I was going to make it past the first audition, so I thought at least I could lay on the beach and make a vacation of it," she laughs. While still under contract with American Idol's affiliated label and management team until August, when the next wave of contestants cycles through, Beard's been hashing out new solo material on her own and with Vallejo. "So many people have been waiting to see what I do next."

Bob Dylan's latest, Together Through Life (see "Phases & Stages"), comes entrenched in the traditions of the Tex-Mex borderlands, even name-checking Billy Joe Shaver, but who knew the great American songwriter was an honorary Texan (see "Red River Shore," Nov. 7, 2008)? In the latest Rolling Stone, Dylan says he received the proclamation from Dubya himself back when he was still Gov. George Bush and later credits Doug Sahm as a primary influence for his new album. "Doug was like me, maybe the only figure from that old period of time that I connected with," he says. "I'd never met anybody that had played onstage with Hank Williams before, let alone someone my own age. Doug had a heavy frequency, and it was in his nerves. ... I miss Doug. He got caught in the grind. He should still be here." General admission tickets for Dylan's Never Ending Tour engagement at Round Rock's Dell Diamond, Aug. 4, go on sale next Saturday, May 16, 10am.

Last month Apple hit a McDonald's milestone: more than 1 billion iPhone applications served worldwide. Fusion collective Ohn is perhaps the first local outfit to capitalize on the new medium, customizing an application – available as a free download through iTunes – that allows fans to listen to both of Ohn's albums, along with exclusive live recordings and remixes. The app, as those who actually own iPhones call them, was developed by Mobile Roadie and essentially serves as a traditional website, posting gig alerts, music videos, photos, and feedback forums. Since being uploaded three weeks ago, Ohn's application has been downloaded some 300 times, resulting in more than 1,000 individual song plays. The music is also linked directly to iTunes for purchase. "It's real viral, one more way of getting things out there instead of relying on a record label or radio," enthuses bandleader Bill Sarver. Hear Ohn's downbeat trip-hop in real time and space at Speakeasy on May 20.

• Keep an eye out for TV Torso, the new project from Sound Team's Matt Oliver and Jordan Johns. The indie rock outfit has two 7-inches ready to be pressed and a full-length in the works. "It's a lot more straightforward and stripped-down than other stuff I've done, with a lot of tape echo," enthuses Oliver from his revamped Big Orange studio on the Eastside. TV Torso turns on at Club de Ville on Friday, May 8.

• Americana revolver the Band of Heathens is the latest homegrown standout to get the nod for the 35th anniversary season of Austin City Limits, which rolls the cameras on Tuesday, May 12, for a taping of Kenny Chesney. A limited number of tickets will be available. For more information, call 475-9077. Web-based side project ACL Stage Left, meanwhile, continues its local winning streak on Friday, May 8, with Brazos.

• Want to play at the Chronicle's annual Hot Sauce Festival in August? Sign up for Sound Wars, our two-month-long digital battle of local bands, by uploading one song to the paper's Musicians Register. The winner, to be determined by three rounds of online voting, scores the paid gig and a half-page ad promoting a future show or CD release. See austinchronicle.com/soundwars for complete rules and details.