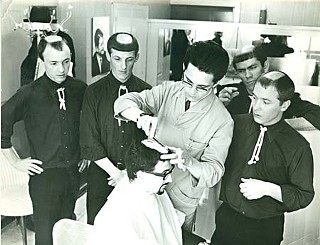 In early 1964, the Mad Men era was finally winding down. The Vietnam War hadn't yet depleted the country's morale, rock music was on the verge of a Fab Fourgasm, and the U.S. was still writing the foreword to its ensuing decade of political upheaval, racial unrest, and spiritual confusion. For five American men stationed in occupied West Germany, the suburban family man and highball-sipping suit weren't options.

Brought together by military service and the desire to be something other than military men, the quintet distracted itself with music. Initially, they were called the Torquays – lead singer/guitarist Gary Burger, bass player Eddie Shaw, organist Larry Clark, Texan drummer Roger Johnston, and rhythm guitarist Dave Day. In their time off-base, the five immersed themselves in the European wave of the British Invasion, gigging weekends at rowdy GI bars and playing covers. In 1965, after being discharged, they started playing more frequently in different German cities, sometimes every night of the week, for six to seven hours.

"It was a great place for us to be young men," Burger admits today.

Burger currently resides, "by accident," in Turtle River, Minn., population 77, as mayor. He recalls his Monk time fondly. "One night they passed the plate around, and we'd made $10 each. That was the night we went pro. Music was the entrée to a lot of things in Germany. It was a hotbed of live music, with tons of places to play, and the audiences were there from the beginning of the night until 3 in the morning."

According to lore (and Burger), he set his guitar against an amp during practice, went to the bathroom, and returned to discover the two making a loud squealing sound. One slow night at the Rio Club in Stuttgart, the Torquays were experimenting with feedback and distortion and attracted two German ad men. Not only did Karl-H. Remy and Walther Niemann want them to expand that sound, they also saw a way to birth their twin ideas of mission and identity. In other words, the two had a vision, and with that they took the five men and christened them Monks. The Americans were to think and dress like monks, which meant black robes and tonsures in public. By late 1965, they landed in Hamburg as a new order.

"That's how you got a corporate recording contract then," says Eddie Shaw, "if they knew you had smart people working on your image. So [Remy] would say, 'A monk does this, and a monk does that, and you're not Torquays anymore, so think like a monk.' In that sense he established our brand."

Shaw came to the Army from Nevada, where he once played in Carson City with a 12-year-old Wayne Newton (and palled around with morning man on local Fox affiliate Joe Bickett, still a close friend). He was a jazz guy, thus open to experimenting, and since everyone in the band had different musical backgrounds, they threw out everything they knew and approached songwriting as minimalists. The Torquays did covers and were more R&B-oriented, recording a handful of demos in 1964. The Monks sound was primitive, a clean slate. It was a social experiment.

They decided to become deconstructionists, Shaw shaving down basslines to one or two notes. Dave Day replaced guitar with banjo to accompany the organ and drums. The lyrics were repetitive, chantlike, and the songs were cadenced and militaristic in their everybody-sings ethos, but also tribal, thumping. The fact that they were in Cold War Germany and ingesting methamphetamines, among other things, did nothing to lessen the paranoia of that sound. War is hell, and the Monks didn't shy away from conveying that in songs like "Complication," though Shaw admits they didn't all agree with the sentiment at the time.

It was a vision beyond the times. In Hamburg, where they largely played as the Monks, they were the gonzo version of the Beatles, sculpting a rhythm-based sound that was essentially a template for Krautrock when Can and Faust were still in short pants. That their experiments with feedback, as well as style of dress, were accepted in Hamburg was to their advantage.

"We had to have a sense of humor about it," Burger laughs. "We were proud of our transformation into the Monks, and a little spooked by it, too. The kids didn't know how to dance to our music. It wasn't 'I Wanna Hold Your Hand.'"

"It was a combination of striptease and rock & roll clubs, and right around the corner was the Star Club, where the Beatles played," Shaw recalls of his time in the freak-spirited city. "In Hamburg, people had pretty much seen everything, but the farther south in Germany we played, the more people were intimidated by the costume. It was an interesting experience, because walking down the street we would never get direct eye contact from anyone, except for old women, who liked us until we started cussing."

In 1966 they released their sole LP, Black Monk Time, mostly deconstructed, re-recorded songs from early demos, plus a few new songs, with Jimmy Bowien of Polydor Records producing. The staccato riffs of "Shut Up" and "I Hate You" immediately sparked against opener "Monk Time," where Burger spits, "You know we don't like the Army!" The music was darker than the Torquays and existed outside a genre at that time – they were creating it as they went.

Later attempts at commerciality via more palatable love songs failed to mesh with the intensity of their earlier music, which effectively signaled the end of the band. In 1967, on the verge of a short tour of Southeast Asia, drummer Roger Johnston sent word he was going back to the States. The band had developed nasty habits and was exhausted. "Beat to hell," Burger says.

"In hindsight, it was probably best the Monks did not go to Vietnam," he continues, "but there's always a damn war going on! The Vietnam War is ancient history, and I can't sing about it anymore, but there's always a war, and the United States is always in the thick of it. Monks songs, yes, they're just as relevant today as in 1966."

That's no doubt why Seattle archivists Light in the Attic felt there's no time like the present for a full-fledged revival. With the reissue of Black Monk Time, paired with The Early Years 1964-1965, a collection of demos from when they were the Torquays, the label has brought the Monks full circle at a time when many new bands are trying but none is replicating that agitated pop sound.

"And their story! Kubrick couldn't have thought this up," exclaims Light in the Attic co-owner Matt Sullivan, an avid fan/collector who's dreamt of releasing the Monks catalog for years now. (Black Monk Time has seen other reissues in the last 20 years, most notably in 1994 on Henry Rollins' label.) "I never thought it would come true though. A few years back, we were fortunate enough to meet Seattle native Dave Day and his lovely wife, Irene. They came by the office, wearing their Monks T-shirts along with those legendary nooses, handing out autographed posters and shirts. We all absolutely loved them. From time to time, Dave and Irene would stop by a Light in the Attic party. By the end of the evening, every kid in the place would be hunkering around Dave, asking for autographs and buying the man a drink. He treated his fans with the utmost respect."

Roger Johnston passed away in 2004, and Day died last year, but at his funeral, Burger had a chance to talk to Sullivan. Sensing he was a good guy, he gave him the go-ahead.

"It's taken about two years to put this project together," Sullivan relates. "Compiling the photos and archival bits, comprehensive notes, and design always takes longer than expected. We went a bit nuts, making limited-edition Monks trading cards, hiring Chicago artist Plastic Crime Wave to design a special limited-edition screen-printed poster. For us, it had to be perfect. This band meant too much to be anything less."

Shaw, who wrote the excellent 1995 autobiography Black Monk Time, is in the process of finishing a 600-page opus on a "drug-addled trumpet player who thinks he's a pigeon" and the "paranoia that developed in the 1970s," no doubt influenced by his time as a trumpet player in the 1970s. He initially resisted the reissue nostalgia but has come around, clearly proud of his Monk time. He does, however, shoot down any notion of a reunion tour.

"I just don't want to be one of those geezers onstage getting their last 15 minutes in before I die of a heart attack," he states.

The group did play New York City in 1999, a show featured in Monks documentary The Transatlantic Feedback, and at a 2004 reunion show in Spain, Shaw says the crowd dressed in monastic garb. Two years later, Silver Monk Time: A Tribute to the Monks, featuring covers by the Fall and Gossip, among others, traced the cross-generational and -continental appeal of the band. In the liner notes to the new Black Monk Time, musicians including Iggy Pop and Yo La Tengo's Ira Kaplan sing their praises, nodding in unison at how what they were doing was, as the curse goes, way ahead of its time.

Burger, who still plays music here and there, relates that his platform as mayor of Turtle River is "no progress." "We don't want any new people up here; we don't want street lights; we don't want septic systems." He just wants to preserve his town, keep it simple and unadorned. He could just as easily apply that to the way of the Monks.