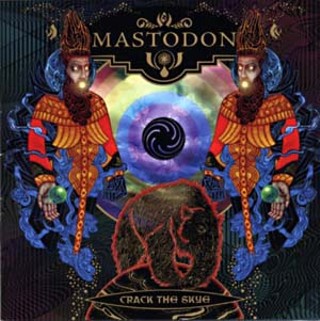 
Mastodon is an unruly beast. Over the course of four conceptually linked albums, the Atlanta metal behemoth has (re)mastered the elements of existence: fighting fire with fire on blackened 2003 full-length debut Remission, taking to the seas a year later for Moby Dick-inspired watermark Leviathan, and scaling the more experimental terrain of 2006's Blood Mountain. Mastodon's latest, Crack the Skye, is a cosmic trip for the ages, balancing the fantastical, spiritual, and deeply personal, much of the album taking inspiration from the suicide of drummer Brann Dailor's sister Skye. Eerily progressive and characteristically cryptic, the title track, featuring the death rattle of Neurosis' Scott Kelly, not to mention "Quintessence" and "The Czar" suite, could be set in the year of Rush – 2112 – with spectral atmospherics provided by keyboardist Rich Morris. The elliptical funerary "Ghost of Karelia" channels the heavy psychedelia of Tool with a séance culled straight from The Tibetan Book of the Dead. Bassist Troy Sanders largely eschews his sea captain's growl for melodies that at times recall Diary of a Madman-era Ozzy Osbourne, no doubt aided by producer Brendan O'Brien (Bruce Springsteen, AC/DC). Favoring groove over aggression, the interplay between guitarists Brent Hinds and Bill Kelliher remains inextricable to a large extent, but Hinds earns the spotlight here, with echoes of David Gilmour in the tribal warfare of opener "Oblivion," a full-throttle surf solo in "Divinations," and a Zappa-esque tightrope routine that snaps halfway through closing 13-minute epic "The Last Baron." Even then, Crack the Skye is a prog-metal classic, void of pretension or hesitation.