The Wild, the Innocent, and the Five Armadillo Shows 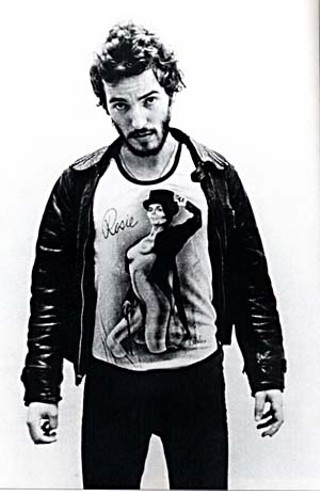 Burton Wilson from The Austin Music Scene, 1965-1994: Through the Lens of Burton Wilson with Jack Ortman: "On March 15, 1974, at a concert in the AWHQ, I was standing backstage chatting with Bruce Springsteen before he went on. All of a sudden, three very attractive women burst into the room. ... It was Rosie herself and two other beauties. They moved like the wind, slipped off his jacket, put this T-shirt on him, giggled, and left. He stood there stunned. I said, 'Bruce, we have got to document this.' He agreed, so I posed him against a blank wall and took this photograph." (Photo by Burton Wilson)

Local lore has it that Bruce Springsteen landed at Austin's Armadillo World Headquarters because local poster artist Micael Priest snuck a copy of The Wild, the Innocent & the E Street Shuffle onto Armadillo founder Eddie Wilson's turntable (see "Tales Behind the Posters," Oct. 6, 2006). Wilson liked what he heard and booked Springsteen. True or not, the story is emblematic of the Boss' Southwestern foray for the nearly two dozen shows he played in Texas the following year.

Springsteen hit the state March 1974, smoking from the one-two punch of his 1973 debut, Greetings From Asbury Park N.J., and The Wild, the Innocent & the E Street Shuffle that same year. His brash, Joisey boy style was welcomed in a town familiar with rebellion. For March 15 and 16 at the Armadillo, Alvin Crow & the Pleasant Valley Boys opened, and Jim Franklin drew the still sought-after poster. The June 15 appearance is scarcely documented except by Priest's poster, inspired by Greetings and filled with graphic references to Springsteen's songs. When the juggernaut passed through Austin one final time that year, Nov. 6 and 7, the Priest poster was reprised. By then, Born to Run was speeding down the turnpike toward its release the following year.

The shows? A dreamy, hazy memory tumbled into a single freeze-frame moment: His violinist stands center stage with the spotlight cascading over her like a Jacob's ladder from the heavens. In half-shadow is Springsteen, devilishly handsome, with a glistening black beard and curly hair.

What did he play? "Rosalita (Come Out Tonight)," "New York City Serenade," "Twist and Shout," and "Blinded by the Light," among others. The November shows heralded new material in "Jungleland" and "She's the One." His sound was fresh, fervent, real. Just 10 years earlier, the Beatles and Stones invaded popular music with powerful British rock. A decade later, a working-class hero from New Jersey re-envisioned rock, road-tested it in Texas, and drove it back to the world.