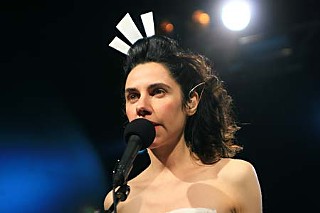 
Predictably, Saturday's mellow 45-minute set only featured songs PJ Harvey and longtime creative partner John Parish have written together for 1996's Dance Hall at Louse Point and their new collaboration, A Woman a Man Walked By. Still, it was a thrill to see Harvey come alive in a white strapless gown with straitjacket belts and a peacocklike hair accessory, which made her look like a virgin mermaid from a Dalí painting. Against her surreal figure center stage, set and new album opener "Black Hearted Love" was rather subdued; on "Sixteen, Fifteen, Fourteen," Harvey let it rip, prophesying like the second coming of Patti Smith, though it felt like she was deliberately trying to keep things calm and restrained, giving the set a sort of speakeasy trot. She played percussion here and there, gently shaking her hips, but Parish and the backing band held down the instrumentation, and the spotlight fell on her voice, which still sounds crystalline. The 21st century has seen lukewarm albums from Harvey, 2007's White Chalk exorcizing the sounds from her haunted house. A Woman's not the best representation of Harvey's talents, and live, the more vitriolic tracks, such as closer "Pig Will Not," felt spiritual rather than sexual. In that gown, she looked like she was channeling something higher.