Kanye West came to South by Southwest 09 to party. Decked out in black sunglasses and a gold bullet chain, the illustrious rapper took the stage at the Third Street block party known as the Levi's/Fader Fort on Saturday, lighthearted and with little agenda, essentially curating a two-hour mixtape for his GOOD Music imprint that included appearances from Common, lead Cannabinoid Erykah Badu, and the ever-entertaining Fonzworth Bentley.

Although it was an unofficial SXSW event, West's appearance still speaks to the magnitude and stature of the annual Music Conference, which can no longer be considered merely an industry affair. This was the year that the Festival firmly established itself as an essential pop-culture destination, where bands and brands – not to mention celebrities such as Rachael Ray and Perez Hilton and the media that cover them – look not only to make a name for themselves but more so to retain relevance.

Punching in "SXSW 2009" generates more than 4,000 hits on Google News, nearly four times the amount of media impressions from just two years ago. In fact, the biggest breakthrough at SXSW was actually that of Twitter, the microblogging mechanism that allows for casual updates and observations, such as this insightful aside from Grizzly Bear's Edward Droste from the Pitchfork/Windish bash on Friday at Emo's: "Department of Eagles with Victoria Legrand [of Beach House] covering the Dead. So hilarious and awesome."

Media outlets from around the world covered and documented SXSW from every possible angle. Daytrotter.com recorded sessions from locals T Bird & the Breaks, Corto Maltese, and the Strange Boys, who had Rolling Stone's David Fricke bobbing away during their riveting SXSW showcase at Beauty Bar Backyard. Andrew Bird and Ben Harper & the Relentless7 took flight for the 35th anniversary season of Austin City Limits, while Carlene Carter, the Oak Ridge Boys, and Tinted Windows – the unremarkable grouping of members of Hanson, Cheap Trick, and the Smashing Pumpkins – went live from the Austin Convention Center on DirecTV.

NPR further bolstered its indie tastemaker credentials with the transmission of the Decemberists' staging of The Hazards of Love with Lavender Diamond's Becky Stark and My Brightest Diamond in tow, while stations ranging from KCRW in Santa Monica and Seattle's KEXP to the online-only WOXY all broadcast their picks of the litter from the front lines. PJ Harvey & John Parish even stopped by Buffalo Billiards to chat with OTR on 101X.

"Usually after I finish a project, I go back and sort through my old tapes," Harvey revealed. "That's how I came across 'Black Hearted Love.' I felt like that song needed to be heard and demanded a body of work to go with it."

More than ever, nostalgia reigned supreme last week, thanks in no small part to Metallica's colossal 90-minute electrocution at Stubb's, which James Hetfield deemed "the worst kept secret in rock & roll history" and is now available for download at www.metallicalive.com. The recently reunited Jane's Addiction in kind launched a full-blown stadium spectacular from inside the old Safeway in East Austin early Friday morning. (Tickets for the band's stop at the Frank Erwin Center, May 12, with Nine Inch Nails, go on sale this Saturday through Texas Box Office, 10am.) Lest we forget, flashbacks were also incited by Devo, Echo & the Bunnymen, the Sonics, Japan's Flower Travellin' Band, and the acid-house dementia of Primal Scream. 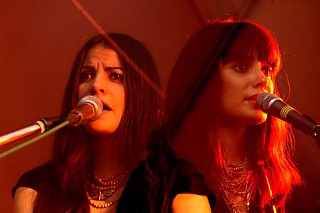 There was no shortage of new talent, though – quite the contrary. Some personal highlights included the patient sedation of Here We Go Magic's psych pop and the looped neoclassical wonderment produced by Peter Broderick. Women's indie Krautrock workouts made for cold sweat at Urban Outfitters, while J. Tillman delivered quietly disarming mountain songs that called to mind Neil Young at the Canterbury House in 1968.

"The truth is that different acts have always used South by Southwest for different reasons at different stages of their career," reasoned SXSW Music Creative Director Brent Grulke. "Really, the most important thing that someone can come away with is the names of some people they might want to collaborate with creatively or professionally, the opportunity to meet like-minded people and exchange phone numbers or e-mail addresses."

Indeed, the malleability of SXSW remains its greatest asset, allowing the Conference to grow each year and introduce new facets, such as the Austin Record Convention – a mere teaser for the upcoming spring show at the Crockett Events Center April 3-5 – which was teamed alongside the inaugural Texas Guitar Show in the Austin Convention Center. It's worth noting though that in order for the Austin Record Convention to return to the spring prominence it once held at Palmer Auditorium before the dawning of day parties, the Festival will need to make adequate room for it, perhaps beside Flatstock. 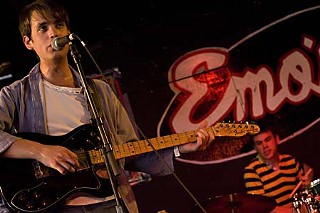 The greatest expansion in activity this year occurred on the Eastside, in both the number of official SXSW venues (the Music Gym, the Independent) and nonsanctioned hideouts such as Club 1808 and the Compound, where Wu-Tang Clan's GZA got crunk with Black Lips. The French Legation Museum boasted some of the best lineups of the week, including Dirty Projectors, Camera Obscura, and South African breakout Blk Jks, oftentimes with longer lines to get in than all but a select few SXSW showcases.

Farther south on Cesar Chavez, the private Red Bull Moon Tower established an after-hours/early-morning hot spot, with performances from the Riverboat Gamblers, I Love You but I've Chosen Darkness, and Lady Sovereign. Domy Books transformed its back lot into something resembling Los Angeles' the Smell scene on Saturday, compliments of the riotous Mika Miko, noise-punk zeitgeist No Age, and Nite Jewel, whose narcotic synth-pop glow defied the afternoon daylight. Down the street, Okay Mountain hosted Autobus Records, lilted by the heavily syncopated lullabies of Andrew Kenny's the Wooden Birds. The award for most creative day party definitely goes to MyOpenBar.com's presentation of Four Square Punk, where bands such as Finally Punk and the Mae Shi alternated songs across four decidedly DIY stages within a stone's throw of a free roller-skating rink.

With so many variables at hand, there's bound to be a few near natural disasters each year, and one such unofficial SXSW incident occurred at Ballet Austin during the second annual KVRXplosion, when Monotonix's pro-wrestling-style false-count-anywhere punk freak-out "left 10 dead and five injured," according to the mock tagline for the YouTube video that's been circulating ever since. "It was about as controlled as chaos can be," recalled KVRX business manager Michael Sedillo via e-mail. "Of course, we had our share of spills and marks on the wall, but besides that it was relatively unharmed."

That was SXSW 09 in a nutshell: chaos and confusion, exhilaration and exhaustion, erupting in transcendent bursts of excitement and color like the choreographed fireworks over Auditorium Shores for the finale of Explosions in the Sky. One couldn't ask for a better week in Austin.