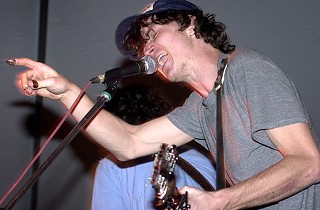 Some things are out of a band's control. It wasn't the Felice Brothers' fault they were playing in a big tent that made their sound boom into a muddy haze and insured that subtlety in their lyrics was lost to the ether. With a drunken pose, the New York Staters didn't seem to care, and while it didn't bother the equally rowdy, overflow crowd, anyone looking for more than a white-trash combo of the Band meets the Gourds would've been sorely disappointed. The youthful quintet sampled liberally from the upcoming Yonder Is the Clock. The band opened goth-like with "The Big Surprise," barrelled into "Run Chicken Run," and closed with a blaring version of "Penn Station," which included a rapped middle and lots of audience call and response. In between, there was lots of accordion wrestling, fiddling while kneeling, and stage bumping all in the spirit of brotherly love. The set was partially redeemed with the near gospel spirit of Townes Van Zandt's "Two Hands," which offset the goofy "Whiskey in My Whiskey."