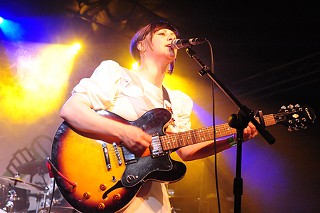 Where were the kilts, dammit? The Scottish Arts Council offered up a six-pack of musical riches with fresh-faced indie rockers We Were Promised Jetpacks getting things started early. The quartet, which drops its first album in May, comprises adorable college-age fellas who were intense with a healthy dose of aw-shucks. "This stage is huge! It's larger than our flat," exclaimed singer/guitarist Adam Thompson. The outfit belted out a powerful set of skittery indie rock, Thompson's voice sometimes reminiscent of Morrissey's. Next up was Dananananaykroyd, a Glaswegian sextet specializing in "fight pop," which is apparently characterized by screaming. Lots and lots of screaming, accompanied by the musical equivalent of a Jackson Pollock painting: splattery. This is a lot of sound: six kids on a stage, two vocalists/screamers, one of whom has his own drum kit, a guitarist, and a bassist. The nondrumming screamer worked the crowd in between songs, but he needs to learn that there's a fine line between banter and bad stand-up (okay, we understand that Mexican food doesn't agree with you; let's move on, shall we?). Camera Obscura seemed more confident than at yesterday's French Legation party, as keyboardist Carey Lander was back in action. The band emphasized new material, including a pretty ditty called "The Sweetest Thing." The forthcoming album should prove less wistful but just as lovely as what has come before. Charlie and Craig Reid, otherwise known as the Proclaimers, took the stage next for an acoustic set that included the scathing "In Recognition"; the migration-minded hometown hit "Letter From America," which had the Scots in the audience singing along robustly; and a funny, lost-love new tune called "What Makes You Cry."

We Were Promised Jetpacks, Dananananaykroyd, Camera Obscura, the Proclaimers