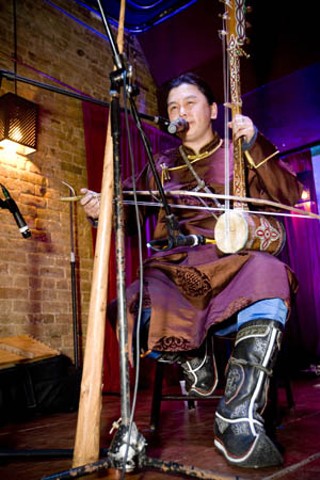 As anybody who's seen the 1999 film Genghis Blues knows, Tuvan throat-singing is a magical style of vocalization that requires its practitioners to sing in multiple pitches. As anybody who caught the prize-winning ensemble Alash, direct from the Republic of Tuva, during its rare U.S. performance on Friday knows, witnessing this traditional craft up close and personal is downright miraculous. Alash features the 2008 Tuvan national grand-prize-winner Bady-Dorzhu Ondar on the two-stringed bow igil, as well as other recent national honorees Ayan-ool Sam, Ayan Shirizihik, and Nachyn Choodu. The four robed men performing – two of whom appeared in Genghis Blues as children – represent a true opportunity to keep this art form alive. With the exotic capacity to sing bass modes and force air through the throat in a whistling combination spanning up to four pitches, the songs were transporting. Playing with a combination of humor and sincerity, Alash finished its remarkable set with a number called "Bashtak-la Deesh Meni Kanchaar?" ("I'm a Joker"). Extensive touring and guesting with Béla Fleck has helped the quartet update some of its sounds for a Western audience. Meanwhile, the well-practiced musicians carried an audience of approximately 200 overseas to a land where the women are beautiful, the horses wild, and the mountainous landscape an object of animistic worship. Between the traditional instruments and the classic Tuvan style, this performance transcended both time and space.