How Far is Heaven

At a private party yesterday at GSD&M's Idea City, Austin-based Loophole Management officially launched Playing in Traffic, which already features locals the Steps and Los Lonely Boys. "There was no one left that we knew at Epic," reasons founder Kevin Wommack, who manages the latter act. The label has big projects in the works. Budding local songstress Sahara Smith, for instance, was in Los Angeles last week putting the finishing touches on her debut LP with the T Bone Burnett camp, and acclaimed Austin bluesman and Honeydripper Gary Clark Jr. is near the completion of his long-awaited fourth album. "Our strength comes through our intimacy with the artists," Wommack stresses. "It's a transparent situation, and we don't have to go through different levels to get them what they need." Playing in Traffic's official SXSW showcase takes place tonight at Maggie Mae's Gibson Room, beginning at 8pm. 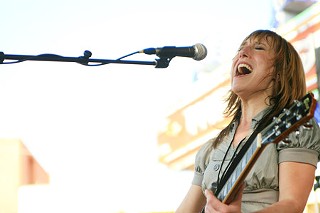 Mojo magazine chronicles U.S. psych and gives a glowing five-star review of the 13th Floor Elevators' import-only, 10-disc behemoth, Sign of the Three Eyed Men, in its April issue (Who cover). "There's still a fascination with American roots music in the UK," observed Editor-in-Chief Phil Alexander via e-mail. "When we come to the States, we're coming to the land that birthed the greatest blues talent, the greatest rock & roll talent, the greatest country talent, the greatest jazz talent, the greatest soul talent, and it's heartbreaking to find that most of that talent is forgotten by the average American." Fitting, then, that Mojo once again sponsored the annual Roky Erickson Ice Cream Social yesterday at Threadgill's. The daylong happening peaked with the emotive blues-romp of Austin's Heartless Bastards and a collaboration between the social's famed benefactor and local indie-folk staple Okkervil River that served a small taste of bigger things to come. Along with the Black Angels, Okkervil River is reworking some of Erickson's archived material for a new album. Frontman Will Sheff is serving as producer on the project. "It's almost done," Sheff said after the show. "Roky sounds awesome."

The mythic status of Daniel Johnston has grown exponentially in recent years. Backed by Brooklyn's Hymns at a capacity Radio Room yesterday, the manic songwriter delivered an epic set that captured the essence of his grandiose rock & roll ambitions, with amplified versions of "Love Wheel" and "Rock & Roll/Ega," a stark contrast to the shattering intensity of his solo electric rendition of "Mean Girls." "We didn't have much practice," Johnston lamented. "We'll do that next year." Rizzoli Publications recently released Daniel Johnston, a collection of his iconic illustrations that features commentary from Harvey Pekar of American Splendor fame, Jad Fair, and Philippe Vergne, co-curator of the 2006 Whitney Biennial. Johnston will be signing copies at the South by Bookstore on Saturday (12-12:30pm) before headlining Emo's Main Room.

Noise-punk wrecking crew No Age throws down for Post Present Medium's party today at Eastside Austin dive Club 1808, essentially an encore of last night's showcase, plus the bad vibrations of Wavves, Infinite Bodies, and Austin's Finally Punk, who appear on PPM's DVD compilation New Video Works. "I think they're great," enthuses No Age drummer and label owner Dean Spunt. "They're not concerned with how great they are with instruments. They just want to play." After SXSW, No Age plans to finally hit the studio to record a follow-up to its Sub Pop breakthrough, Nouns. 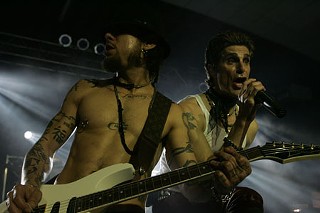 • On opening night at the Parish, the Black Keys' Dan Auerbach delivered a momentous discourse of darkly seductive, heavy psych that felt like a last stand at the Fillmore. The momentum obviously rubbed off on his backing band, My Morning Jacket's Patrick Hallahan and local favorites Hacienda, the latter closing the night with its own scorching brand of hard garage-bop and sweaty R&B. "They're not traditionalists trying to create something old," Auerbach emphasized. "They understand that you have to make it your own and do something new with it."

• If the Dicks' reunion at the Austin Music Awards on Wednesday spurred a few flashbacks, be sure to take a stroll through "Matt Stokes: these are the days," a furiously compiled multimedia history of the Austin punk scene at Arthouse at the Jones Center (700 Congress). The exhibit features a commissioned soundtrack produced by the Big Boys' Tim Kerr and is open Friday (11am-7pm) and Saturday (10am-5pm).