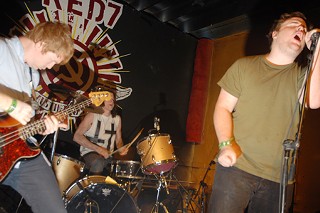 Total Abuse started its set half an hour late, but it didn't make a difference. In just 20 minutes, the Austin quintet did what it had to do, adhering to hardcore's loud and fast rules, emphasis on loud. Eighties hardcore is the immediate touchstone on its 2008 self-titled LP, but within each song there are dynamics and tempo changes, veering from breakneck blast beats to slower, thicker, Negative Approach-ish interludes and moving them past the screamo basics of the band's Sex Pig EP. These guys are certainly young, but that doesn't mean they don't know how to channel their influences into something more unique, hammering out a sound that's based not on replication but rather reinterpretation. The screech of feedback before each song's count off marked a reverence for their hardcore forefathers, but their combination of thrash, punk, and sternum-rattling noise, along with singer Rusty Kelley's wild-eyed bark, make for something harsh, modern, and real. The plodding "Secrets" sounded like aggro Flipper, and "Discipline" absolutely scorched the earth, Kelley's declaration that he needs some of the titular abuse more threat than statement. Add Total Abuse to the ever-growing list of fucked-up 21st century hardcore for hard times.