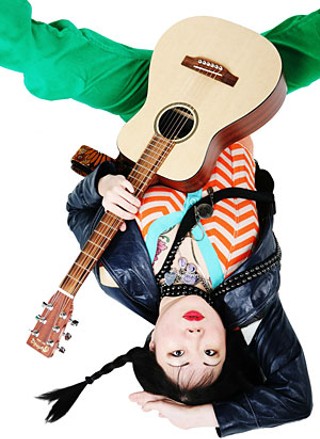 Margaret Cho's version of "Renaissance woman" includes the Enlightenment, New Deal, and Spanish Inquisition all rolled into one: What hasn't the actress/comedian-cum-activist/blogger/reality-TV star done? These days, la Cho is tackling music. Comedy music. And if anyone can pull it off, the mind behind "My Puss" can.

Austin Chronicle: How is it that you haven't yet been to South by Southwest?

Margaret Cho: I never have, but I was in Austin all last week with Patty Griffin. She told me what to expect. We wrote a song together. She's my favorite, favorite, favorite! It's a dream come true to work with her.

AC: Who are you excited to see?

MC: I'm a huge Roky Erickson fan; I'm so looking forward to seeing him. Girl in a Coma. Also, I'm in Amanda Palmer's showcase; I've written songs with both of them.

AC: You're doing so many things. Does your audience dynamic change with these different performance styles?

MC: I won't just go out and do something new if my skills aren't up to a certain level. My audiences trust me. It has to be good.

AC: Rush Limbaugh challenged Obama to a debate. Would you debate Rush?

MC: If he gave me some of his drugs, yes.

MC: Pasties. I'd just rather have nice nipples.

AC: You called Miley Cyrus "a disgrace" for making "slanty eyes" in a picture. Would you wrestle Miley in a vat of Jell-O?

MC: She's just a child! No! That whole thing was so weird. I got hate mail from 10-year-olds.

AC: Would you become a National Rifle Association spokeswoman?

MC: Well, I know how to shoot. The FBI trained me for Face/Off. I shot a lot. It was quite scary. So, no.

AC: Would you ever ride a bull?

MC: I rode a Sybian once. That was really great.