Chet Flippo once wrote in these pages that the true essence of the cosmic cowboy was Doug Sahm onstage at the Soap Creek Saloon, leather fringe flaring under his cowboy hat, Lone Star Beer flowing freely. The history of Austin is inscribed in these iconic moments, a city drafted on the sounds coursing through the streets. From the Vulcan Gas Company's psychedelic ground zero on Congress Avenue to punk haven Raul's on the Drag, clubs come and go, but the music is stamped indelibly upon the very soul of the live music capital.

Every year the Austin Music Awards call forth those spirits, threading their frequencies into the sonic fabric of the present. In addition to celebrating Doug Sahm's defining Tex-Mex groove and the Dicks' three-decade role in defining Austin punk, the 27th installment of the AMAs set up Sixth Street's protean champion Bob Schneider with teen sensations the Fireants and brought Roky Erickson to bear on his contemporary psych inheritors, the Black Angels.

David Yow and the Dicks (Photo by Todd V. Wolfson)

After opening the evening by leading a collective "yee-haw," show coordinator and Chronicle senior Music writer Margaret Moser introduced a video tribute to the local musicians lost over the past year, including Paul Skelton, Chris Gaffney, and the "Mayor of South Austin," Danny Roy Young. The induction of country icons Dale Watson and Kelly Willis into the Austin Music Hall of Fame commenced the awards, but it was the evening's first performance that brought the crowd to its feet.

The Southern Sirens showcase blended the immense talents of Suzanna Choffel, Ruthie Foster, and Carolyn Wonderland, the three local muses conjuring jazz, soul, and blues only to explode them beyond their roots. Choffel, who surprised with a well-deserved win for Best Indie Band, swelled a gathering storm behind "Raincloud," her breathy vocals drifting atop a jazz tempest. Stepping to the mic, Foster declared, "We have love in this house!" before filling the room with it behind the soulful surge of "Stone Love." Wonderland put emphatic proof to her 2009 wins for Best Female Vocalist and Blues Artist with the ferocious "It Ain't Nobody's Fault but Mine." The tempest finally burst, however, with the group chorus of Ray Charles' "Yes, Indeed!" local crooner Nakia adding his lead to the female supergroup. 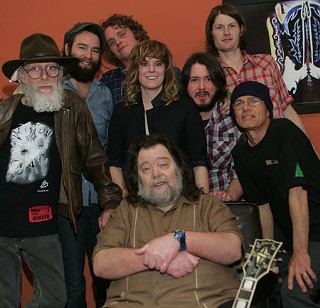 This year's winners, which include the five-award highlight of new indie powerhouse the Black & White Years, represent the eclectic depth of the local scene. The Sword took top metal honors, and Reckless Kelly ruled the country vote, while Atash and Overlord once more claimed the world and hip-hop categories, respectively. Bob Schneider, as always, proved the most versatile, taking home Best Male Vocalist and Band with Lonelyland but also Best Bluegrass for his Bluegrass Massacre. Who better, then, to play mentor to the teen titans of the Fireants? Opening with the smooth folk of "Changing Your Mind," Schneider cut more eccentric with the Tom Waits-ian growl and carnivalesque dirge "Murder." The Fireants held their own, steel drums accenting the Latin-tinged "Slower Dear." 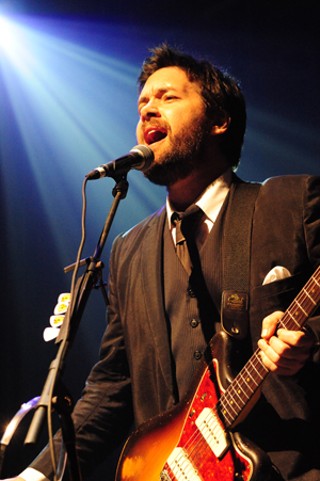 The Dicks provided a harsher lesson, provoking the front rows into fist-pumping ecstasy as they rehashed tracks from their seminal 1980s split LP with Austin's legendary Big Boys, Live at Raul's. Gary Floyd stalked the stage with a nonchalant menace, unleashing "Dead in a Motel Room" with steel spite. Punkaroo Dotty Farrell joined for "Rich Daddy," though the highlight was the Jesus Lizard and Scratch Acid's David Yow thrashing on "Wheelchair Epidemic" before the band threw down closer "Dicks Hate Police."

If the Dicks set invoked the fury of Austin, the tribute to Doug Sahm led by his son Shawn represented the fun. Hearkening his father in looks and groove, Sahm's band, the Tex-Mex Revolution, was joined by familiar Sir Doug compatriots such as Augie Meyers and Ernie Durawa. The border-crossing stomp of "Nuevo Laredo" melded with the Meyers-led Texas Tornados classic "(Hey Baby) Que Paso" and the crowd favorite "She's About a Mover." It was Musician and Songwriter of the Year Alejandro Escovedo's rendition of "Too Little Too Late," backed once again by the Fireants, that stole the set. 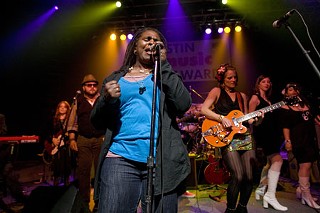 As the lights dropped for the night's final set, Sahm's groove gave way to a barrage of distortion at the hands of the Black Angels. Pounding out the psych rhythms and intensity of "You on the Run" and "Young Man Dead," the Angels bathed in the black-light glow of the ages, brought full circle as Roky Erickson stepped to the stage to deliver 13th Floor Elevators' central "Splash 1." With Alex Maas taking up the electric jug, Erickson and the Angels shut the show down with a blistering "You're Gonna Miss Me." A collaboration not soon forgotten, but the music here never is.