7pm, Habana Bar Hometapes might have relocated from Brooklyn to Portland, Ore., but they've still got a digit on cross-cultural pulse. Danish headliners Slaraffenland and former tourmates Efterklang return with spaced-out mood music and whimsical chamber rock, respectively. Quintet Slaraffenland dropped EP Sunshine last fall, and a new LP is forthcoming. North Carolina trio Megafaun paints bearded Appalachian tunes with an experimental blush, Florida hip-hoppers CYNE keep it smooth and soulful on latest Pretty Dark Things, and Stars Like Fleas cue the strings and polish the brass from last year's The Ken Burns Effect. Gypsy-folk duo A Hawk & a Hacksaw, back in New Mexico after a stint in Budapest, and Madison, Wis., electro quartet All Tiny Creatures pull down the drawbridge. – Audra Schroeder

7:30pm, the Parish; Fri. & Sat., the Ale House, 7:30pm The Hotel Cafe started out as a small Hollywood coffeehouse but has turned into something larger: a support group for L.A. songwriters, venue for touring acts, and promoter of several wildly successful national tours. Over three nights and two venues, the Hotel Cafe presents a sampling of favorites from its homegrown scene and abroad. Thursday highlights include Ireland's Lisa Hannigan as well as two cafe regulars, Los Angelenos Jim Bianco and Greg Laswell. Friday, the California country-rock of Rocco DeLuca & the Burden, signed to Keifer Sutherland's Ironworks label, shakes the walls, while up-and-coming pop diva Erin McCarley is likely to bring down the house. Oklahoma's Samantha Crain & the Midnight Shivers are sure to garner the most interest Saturday, as Crain has drawn comparisons to onetime Dylan muse Karen Dalton. – Jim Caligiuri 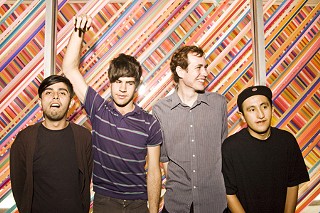 8pm, Red 7 Dean Spunt, one-half of L.A. noise-punk juggernaut No Age, founded Post Present Medium Records with settlement money he received from a car accident involving Backstreet Boys' Kevin Richardson. Since pressing the label's first release in 2001, PPM has been a reliable source for underground avant-rock that, like King Coffey's bygone Trance Syndicate label, serves as a reflection of Spunt's own interest in the boisterous and bizarre. "I'm not really worried about selling a lot," Spunt says. "This just makes sense." He handicapped PPM's showcase:

Total Abuse: "They're kids, and they shred – just raging hardcore. They sent me the songs for their new 7-inch, and they're really good."

Silk Flowers: "They're from New York and probably the weirdest band I know, like Kraftwerk on a really shitty four-track or 'Cough/Cool' Misfits."

Gun Outfit: "We played a house show with them in Olympia, Washington, where they're from. They remind me of Dinosaur Jr., Meat Puppets, and X put together."

Soft Circle: "That's Hisham Bharoocha, who used to be in Black Dice. He does this really cool-sounding ambient ESG dance kind of stuff. It's a one-man thing."

Abe Vigoda: "Abe Vigoda are one of the most awesome bands to come out of L.A. They have a great vibe, this tropical punk and goth thing. They keep changing and totally blowing my mind every time I see them."

Mika Miko: "Hands down one of my favorite bands. Their new record, We Be Xuxa [out May 5] is like old Redd Kross with the Buzzcocks meets weird, old Delta 5 dance stuff. It's just fucking great." – Austin Powell

8pm, Room 710 Last year's Encore Records day party in-store peaked with interstellar instrumentalists Earthless setting their controls for the heart of Cream in a 30-minute back draft of psychedelic tonnage. The San Diego trio's double-disc scorcher last October, Live at Roadburn, made the local set sound unplugged. Also at Encore was another SoCal cell of mostly instru-metal acceleration, Ancestors, whose two-track, album-length debut last year, Neptune With Fire, hailed the L.A. fivepiece as fiercely gravity-free as well. Its lead axe and beat master, Justin Maranga and Brandon Pierce, moonlight in another City of Angels stallion, Night Horse, whose fall Tee Pee debut, The Dark Won't Hide You, lunged it Danzig-style on fare including Sleepy John Estes' "Worried Life Blues." Black Math Horseman, meanwhile, headed out of the Valley and into the desert with Scott Reeder (Kyuss) for its April initializer, Wyllt. Given that Annihilation Time burps its hardcore zip-gun metal out of Oakland, Calif. (III: Tales of the Ancient Age), NYC indie Tee Pee (born 1993) depends on the Brooklyn-born debut of Kreisor, Beyond Our Controls, to open its showcase raping the Right Coast with with organ-toasted 1970s psych rock. – Raoul Hernandez

8pm, Soho Lounge When Siltbreeze Records started in Philadelphia, 1989, the criteria for putting out an album was pretty cut-and-dry: Founder Tom Lax liked it. That included the Dead C, Harry Pussy, Sebadoh, and Bardo Pond offshoot Alasehir, among others. After a decadelong onslaught of releases, Siltbreeze laid dormant for about three years while Lax focused on other things.

"The late 1990s and early part of this decade saw some really terrible music, underground as well as pop culture," he says. "I wasn't into what I was hearing, so I immersed myself in the culinary world, becoming an executive chef in the process. I didn't have time to be bogged down with releasing CDs that only about 100 people wanted. So I stopped."

Then he heard a demo from a Columbus, Ohio, trio called Times New Viking. "Listening to the first track on that demo, the opening sounded like Blurt's 'The Fish Needs a Bike.' I was sold."

If you don't get that reference, Lax is used to it. Siltbreeze has been around for 20 years now and is still vital, which doesn't seem crazy to him. "This business is full of people who operate within the Dorian Gray parameters," he sums up. "Noise and lo-fi, like candy and cavities, will never go away."