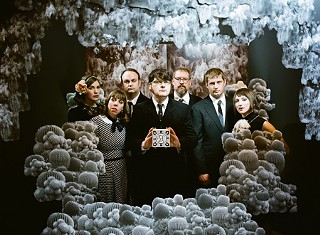 No secret that Colin Meloy has a penchant for the epic, but the Decemberists' new album, The Hazards of Love, is his Odyssey. Secluded in a centuries-old farmhouse in France and inspired by the UK folk revival of the 1960s and its crossover into heavy metal mythology, the indie songsmith crafted a sprawling, conceptual narrative that follows the protagonist, Margaret, as she encounters a forest queen; a dissolute rake; her lover, William; and the river that separates the two of them.

"The whole thing was written in order, which was nice because I felt like I had a pretty good feel of the arc as I wrote it," Meloy confides. "It's supposed to be a romantic tragedy. It certainly doesn't end well for the main characters."

In preparation for the Decemberists' debut of the album in its entirety at Stubb's, Meloy provided the following CliffsNotes.

"The Hazards of Love 1 (the Prettiest Whistles Won't Wrestle the Thistles Undone)": "It starts in the way that many old folk songs do – with somebody sort of venturing out from their comfortable surroundings into some kind of forest."

"Isn't It a Lovely Night?": "That's a duet that Becky Stark [Lavender Diamond] sings with me. When she came in to record her songs, she actually wore two separate gowns, depending on which song she was working on. She was very particular about getting in the right mood."

"The Rake's Song": "Even though I have a history of writing violent songs, it's the most violent song I've ever written. It really pushed me beyond what I was comfortable writing, but it felt like the song was calling for it. It's all about context. Obviously it's horrific, but it brings to mind a lot of the old folk songs, which were equally horrific. I think they dealt with violence a lot more easily than in contemporary storytelling."

"The Queen's Rebuke/The Crossing": "This was our attempt at sludge metal. I love that kind of music, that ambition in creating something so heavy and bombastic. Not only that, but the record owes a lot to classic and contemporary metal forms. There's a part of that music that tends to be very narratively and structurally ambitious. I've always been impressed by that."

"Annan Water": "The title and the subject are borrowed from an old folk song. I think it's a good example of the river as an obstacle motif in folk songs. It's sort of about a time when there weren't as many bridges. Communities were often divided by rivers, and that pops up in folk songs a lot, the idea of the protagonist being separated from the object by something as simple as a river." – Austin Powell

"I want people to realize that I'm a real musician and not just a big mouth," says Ian McCulloch, the somewhat salty frontman of Echo & the Bunnymen, who turns 50 this year.

With three decades in the can, the Bunnymen have already outlived their chief inspiration, Jim Morrison, who, like Janis and Jimi, was in the ground at age 27. With original songwriting team McCulloch and guitarist Will Sergeant intact, the band staged a powerful orchestral rendition of 1984's seminal Ocean Rain last year and plans to release its new album, The Fountain, in August. Anyone who caught the free Auditorium Shores gig at SXSW 06, when McCulloch conjured Morrison's ghost on "L.A. Woman," knows the Liverpool legends revere the Doors.

"The Velvet Underground is me favorite band of all time," McCulloch explains, his accent intact and his attitude still defiant. "But, as a band, the Doors always sounded the most perfectly in-sync with each other. What they were brilliant at were the 3½-minute nuggets of pure tune and hooks. You could hear a song like 'Hello, I Love You' and 'Love Me Two Times' just once, and you'd be singing it the rest of your life. With that atmosphere, you could make out to them, too.

"If somebody else said that, it might sound twee," chuckles the singer.

The same could be said for the Bunnymen's moody, pristine brand of post-punk. McCulloch maintains that his current efforts aren't driven by nostalgia or greed.

"It's not a bad thing to be the influencers rather than the billionaires." – Dan Oko

The Black Keys' Dan Auerbach used to make annual pilgrimages to what R.L. Burnside referred to as "Bad Luck City." Starting on Music Row in Nashville, Tenn., the Akron, Ohio, native would detour west through Memphis, if only to dig through the bins at Shangri-La Records, before heading south to the Mississippi Delta, where he soaked in its rich blues traditions and tracked down folks such as T-Model Ford.

"I just feel so attached to blues music," Auerbach stresses. "I grew up with it. It's always been my rock. I've always had this fascination with old blues records. It's all about that atmosphere that it creates. I'm not talking about Eric Clapton and shit like that, where it's guitar solo after guitar solo. I'm talking about early Sun Records and stuff where it's three or four guys in a room and everyone's playing a small part in making this beautiful, kind of raw wall of sound. Whenever I make music, I always have that in the back of my head, that feeling I get when I listen to those records."

Auerbach's self-produced solo debut, Keep It Hid (Nonesuch) – perfectly sequenced for vinyl – is a new soundtrack to that voyage. From the back-porch folk of opener "Trouble Weighs a Ton" and cosmic-country crush "Real Desire" to the eerie psychedelia in "Heartbroken, in Disrepair" and the maximum Delta blues of "I Want Some More," Keep It Hid unfolds an intimate trek down gravel roads and back alleys to the crossroads of American music.

"I'm always drawn to the dark side," Auerbach confides. "It's easier to explore when you have no one else to answer to. I was feeling really comfortable with where I was at with my writing and my place in the studio. Every little twist and turn was carefully considered." – Austin Powell