For Copenhagen-based duo the Asteroids Galaxy Tour, opening for Amy Winehouse as part of its coming-out party was an auspicious play. With a stage show that swells to six members, the event has emerged as part of the freshly minted band's creation myth. In turn, "Around the Bend" ended up on an iPod commercial, and the rest is history. Beyond its ubiquity, "Bend" kicks a masterpiece of rump-shaking, soul-stirring retro-pop. All this and more can be found on Fruit, dropping April 21. The crunchy, Cali, proto-disco opens on "Lady Jesus," Mette Lindberg, the outfit's vocalist, wringing out a voice on the Kate "B-52s" Pierson/Cyndi Lauper end of the spectrum. "The Sun Ain't Shining No More" turns up for early-season beach-blanket bingo, and brass blasts on "Hero" and elsewhere recall Sly & the Family Stone. Escape is good; resistance is futile. (Thu., Emo's Annex, 11pm; Sat., Maggie Mae's, 8pm.) 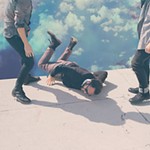