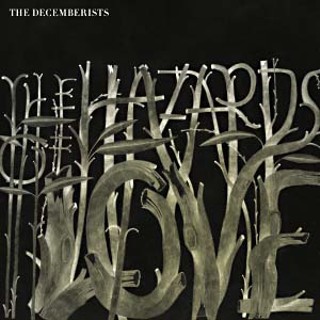 The Hazards of Love (Capitol)


So different from the carefree pop of "Valerie Plame" yet similar in format to the Decemberists' 2006 Capitol debut, The Crane Wife, The Hazards of Love pulses an American song cycle in Brit-folk drag. That's tough territory to plumb given that the celebrated troupe tills the Pacific Northwest, but headmaster Colin Meloy's gorgeously crafted compositions remain multitextured, layering strings against synthesizer in this cycle's fable of love gone awry ("The Wanting Comes in Waves," "Isn't It a Lovely Night?"). Meloy's touchstones form one of the Decemberists' best, precise diction; moody, compelling melodies in glorious arrangements; and elegant phrasing dripping like honey off the tongue ("the prettiest whistles won't wrestle the thistles undone"). It's a typically fanciful journey, less to the far side of Zeppelin's "Battle of Evermore" than near Carterhaugh, home of the elfin Tam Lin. Meloy's choice of My Brightest Diamond's Shara Worden in the role of the queen and Lavender Diamond's Becky Stark as the fey soprano behind hapless Margaret gives Hazards the kick of a musical more so than the beating of a rock opera. Yet, the yearning narrative of Hazards is unclear, and the tragic ending doesn't resolve the maddening questions posed in the story, though they linger in melodic motif: What sort of seductive beast is the Taiga? Is it like Leda and the swan? Doesn't the rake come to some hellish end? It's effective, a literary license granted to drive you crazy with curiosity. Just when the death rattle of a crumbling record industry echoes in the dark, out comes a breath of fresh Decemberist air. (Wed., Stubb's, 12mid.)