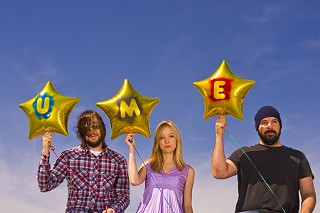 The stereo is melting, waves of guitar spilling out and rising up, slowly forming towering thunderheads and streaks of gray. Lauren Larson's voice is the catalyst, a chilling reminder of the beauty in intensity. She conducts the storm, an electric maestro.

This is Ume (ooo-may), Austin's 7-year-old toddler finding its footing in a rush of indie rock. After years spread across the country, the Houston-formed trio coalesced locally two years ago. The resulting EP, Sunshower, rains down magnetic.

"This was the first time we paid real attention to our sounds," says Larson. "When we did the first album, I was still trying to find my voice.

"I found my voice on this record."

Ume released its debut LP, Urgent Sea, in 2005 on New York imprint Pretty Activity, but Sunshower is nothing if not a call to arms from a reborn band. Where the full-length was spastic, Sunshower, recorded by longtime Austin producer Chris "Frenchie" Smith, is heavy, euphoric.

"We did the whole thing ourselves," nods Larson. "We funded it ourselves. We put it out ourselves. This was a completely DIY project, but it was also just to get some attention to get someone to help us with the full-length."

While Larson lets loose onstage, her long yellow fringe windmilling with the ebbs of odd chords and sudden progressions, her bassist husband, Eric Larson, and drummer Jeff Barrera slowly notch up the power, setting a song afire in a breath. The three play off one another without making eye contact, the result of a group determined to organically access its volatility. Eric's anxious bass thump meets Barrera's syncopated taps, with Lauren boiling over until the clouds open up and the power spills out.

The live show combined with the beauty of the EP have garnered Ume accolades from around the globe, culminating in newfound superfan Dave Allen, Gang of Four bassist, Twittering to promote the band. In an era where überlabels such as Touch and Go are forgoing new music, Ume crosses its fingers. Lauren continues to teach aspiring rock stars guitar at Girls Rock Camp Austin, while the band writes like crazy, preparing for a (hopefully) upcoming full-length.

"When we were first starting to write a lot of these songs, there was a moment where we switched from just having these songs to actually having a purpose for them," explains Eric Larson. His wife agrees:

"Now we finally know that this is what we're trying to do." 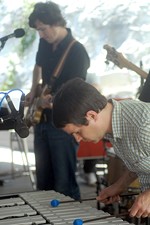