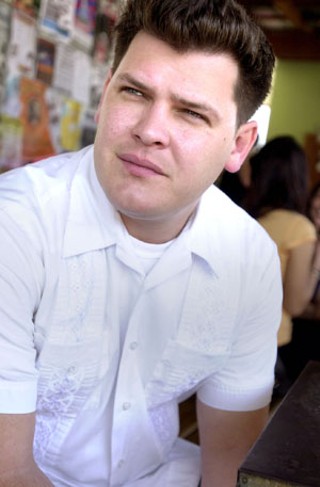 Late last year, Ben Mallott (rhymes with "a lot") released his debut, Look Good, Feel Good, and a mature new voice emerged from Austin's musical underground. Originally from Houston, the 32-year-old singer-songwriter came to Austin for a bit of college but more so the music.

"I switched majors about six times and never quite finished college," he admits. "I went to Europe for a while, and my first gig was in London. I still have a certain amount of stage fright, but in the beginning, it was paralyzing. Let's just say I wasn't invited back."

Upon return, a string of low-paying jobs – waiter, bartender, computer-parts salesman – followed, along with the formation of a band, the Helpers. "We played every bad gig in town," sighs Mallott. "Then we put out a CD, but we didn't have any experience in doing such a thing, and it was promptly ignored."

What began as a second Helpers disc morphed over time into a solo project that's ear-catching thanks in part to its genre versatility. The pearl snaps and fancy cowboy boots he sports on the cover of Look Good, Feel Good might indicate a country vibe – he's a Texan after all – but Mallott's muse delves much deeper into soul, a touch of mariachi, and a brand of folk that gently rocks.

"It was deliberate and I think as well-thought-out as it could've been," he asserts. "I admit to trying to write a soul song when I came up with 'I Want It All.' I tried to write that for two years. It was the last addition to the record, and I'm glad we got it on there."

In front of an audience, Mallott and his band are even more uncompromising, whipping out a warped yet rootsy rendition of Talking Heads' "Psycho Killer."

"We recorded that, but it's not on the record because everyone says it doesn't fit," shrugs Mallott. "I think it's a kickass song. I would not disagree that it's out of place in the live set, but in six months it won't be. Some of the songs I'm writing now are energetic and straightforward and a little less country. They're going to be surprising to the band.

"It really is a tightrope act to balance it all. People come up to me all the time and say, 'You need to stop that shit and find your sound.'