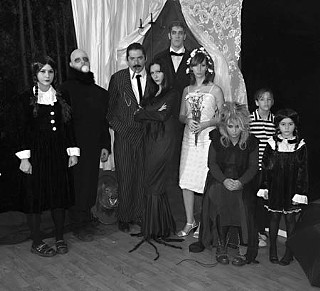 On a cool Wednesday evening at the Parlor on North Loop, Ralph White's lit in red, playing sad songs on accordion next to the Tom Waits mural while a tip bucket gets passed around. Earlier, Plutonium Farmers' guitar squall blew as hot and dry as the pizza ovens that keep opening and closing. Most of the crowd heads out to the back patio, where squirrelly guys clad in studded leather jackets and tall, heavy-lidded blond girls in dresses and boots drink beer in front of men wearing gas masks. Inside, members of local punk bands work behind the counter, shooting the shit with other tattooed friends.

Ask Deborah Gill what she envisioned for the Parlor, and this is it. When she and her family lived a block away in the late 1990s, she noticed there was nowhere nearby to listen to music, whether on the jukebox or live, or get a beer and some food. In 1999, she happened to see the landlord putting up a "for rent" sign in the space, and Gill put her car in reverse. 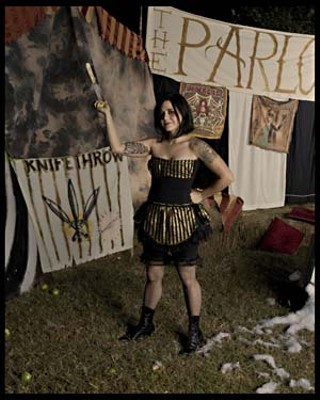 "I had a darkroom at the age of 9," says Autumn Spadaro, above with knife. "I graduated in 2003 from the School of Visual Arts, NYC, with a major in photo. After that, I worked three years in New Jersey for the Department of Defense as a photographer. It's hard not to take pictures of my family when they are all so unique. We have a lot of fun, and as much as they may deny it, they love when my camera is out." (Photo by Autumn Spadaro)

She knew she had to offer something more than beer at a neighborhood dive, so the former New Yorker decided on pizza, and she and her then-teenage daughter Singer Mayberry worked on a dough recipe for months. The Parlor opened the next year, 2000, and a decade later, it's carved out a funky, unique little niche in North Austin where punk rock helps make up the area's communal identity.

"There was hardly anything in the strip," Gill recalls, sitting with Mayberry in Parlor No. 2, Hyde Park, on a Saturday afternoon. "But it was a place you could walk to. And as the live music progressed, we started getting people from all parts of Austin. We started off with two or three nights of music, and now we're seven."

In time, Sound on Sound, Forbidden Fruit, and MonkeyWrench Books pumped more blood into North Loop's DIY community, but the Parlor's gnarled family tree remains at the heart. Gill has four daughters between the ages of 8 and 29 (and a fifth who lives in New Jersey), one teenage son, and five grandchildren, the newest being Mayberry's 5-month-old daughter, Gwyneth. Every specialty pizza on the Parlor menu is named after one of Gill's children or grandchildren, with toppings picked by someone in the family. The family makes its own vegan sausage and pepperoni, and its favorite songs are on the jukebox. They've hosted pizza-box art shows and daylong block parties. Indeed, the Parlor feels like old Austin, maybe circa 1985. 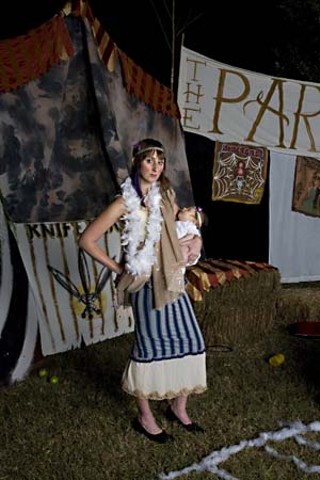 Gill speaks of the venue as a "launching pad" for Austin acts: YellowFever played its first gigs there; Belaire performed frequently; Scott H. Biram stomped there weekly until he was making hundreds in tips. Quite a few national bands have played in the Parlor's close, dark quarters before headlining tours. That "what we do here is secret" ethos applies in small doses, with Gill thinking people enjoy that intimacy.

"I think musicians also like the fact that if you bring 30 friends, it's a packed show," says Mayberry. "Once you fill that small space in front of the stage, the energy is great."

There's something else indelibly unique about the North Loop Parlor: It's the reflection of a musical family. The stage is right by the door, so you immediately walk by the band whether you like it or not. The murals on the crimson walls were painted by Gill's husband, Damon, and some friends, portraying their favorite acts: Nick Cave, Roky Erickson, the Stooges, Robert Johnson, and Alice Cooper, among others. One of the bathrooms is plastered from floor to ceiling with photocopies of old punk album covers. As Gill and her daughter recount the beer-fueled night that yielded various murals, something catches Mayberry's ear. 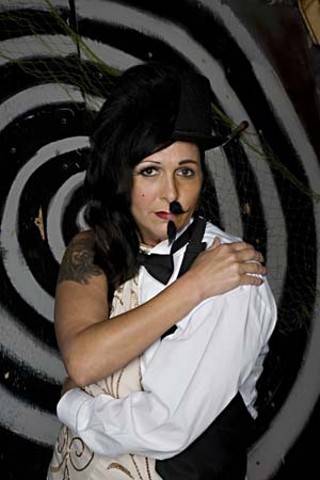 "Oh, sorry, the jukebox turns on by itself sometimes," says Gill, getting up to tell the cooks to turn their boom box down. She's has years of this stuff under her belt.

Before moving to Austin, Gill ran a club in Tempe, Ariz., during the 1990s called the Sun Club, which hosted a prefame Nirvana and other Sub Pop bands of the era. The previous decade, she was a percussionist in a reggae and ska band called the Xtremes with Mayberry's late father, and when they toured, the kids came on the road as well. Her daughters couldn't help being influenced by the music lifestyle.

Singer Mayberry plays bass and keyboards in local rock trio Red Leaves alongside fiancé and guitarist David Lujan and drummer Rich Cali, both of whom also work at the Parlor. Her sister Jasmine Mayberry played bass with hardcore punks Signal Lost. Gill's other daughter, Autumn Spadaro, is the professional photographer of the family, and her portraits of musicians and other punk rock types adorn the Hyde Park Parlor. Gill's husband used to be in Red River favorites Squat Thrust and currently gigs in Ding Dong. They all work shifts at both locations. 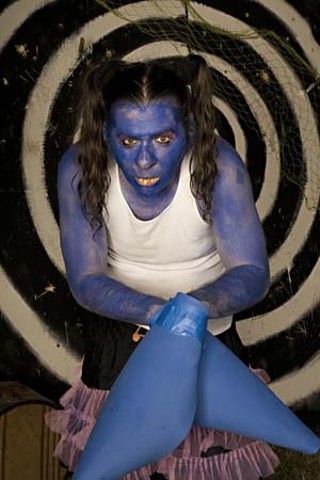 "The Parlor opened when Jasmine and I were in high school," Singer explains. "So at first it was like, 'Oh, your family's weird.' Then around senior year, it was like, 'Oh, cool, your parents own a bar.' And we were working there, too. We would go right after school and make the dough. Then we were cooks and dishwashers before we could bartend. Working there's worked out for both of us, since we're both in bands."

Actually, most of the employees at both locations are in bands, so Gill makes sure they offer flexibility for touring, ensuring employees and family the freedom to pursue creative endeavors. That's not something most small business can do.

"We fit into the old-school Austin ideal," Gill offers. "We're not Downtown. We're in North Austin. There's a community feeling. A few years ago, there was talk of tearing down that North Loop and putting up a multiuse development. You want to talk about people freaking out! That's when we started looking for another location, just in case that actually happened."

The Hyde Park Parlor opened on Guadalupe in 2006, a more polished version of the original that caters to food and drink rather than music, if you don't count a jukebox that has everything from the Mummies to Black Flag. 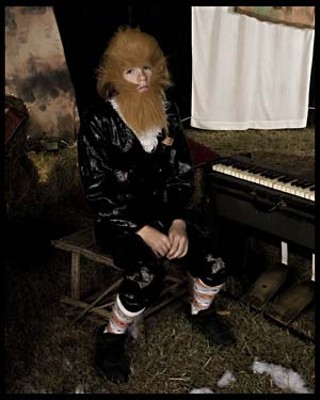 "When we moved into this location," Singer says, "they weren't into us being here. It was a major fight. The neighborhood thought we were a biker bar for some reason."

"So I went to a neighborhood-association meeting and brought pizza and said, 'This is what we're really about,'" says Gill. "And they've embraced us. I really feel that you've got to keep your neighborhoods the way they are. You've got to keep the niche that makes it Austin. It takes a village to stand up against that." Gill's brood could certainly be considered a village, its interfamilial musical networking being that which keeps both Parlors functioning. In addition to booking the North Loop Parlor, Singer books at Emo's through her company Tangled Snark Productions and often helps out mom's DAG Presents, which brought Opeth and High on Fire to the Monarch Event Center last fall and also arranges talent for venues in San Antonio and Houston. Mother and daughter admit that right now's a tough time for promoters but have different reasons for wanting to soldier on. 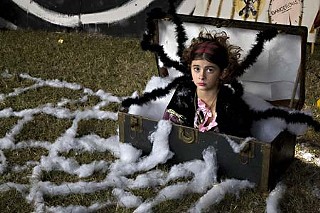 "We both feel out what Austin's looking for," Gill says. "Acts that maybe pass over Austin. I may not be that interested in a band, but I know people here are. It's a gamble every time."

"I like booking North Loop because a lot of touring bands contact me via word of mouth," Singer says. "They heard from another band that they should play there. Tons of touring bands have said, 'This is the best show we've played.'"

As an independent business in this wobbly economy, the Parlor seems to be weathering the storm. Gill notes the rising price of beer, food, and gas. Still, her pizza joints have become a brand in Austin, and there's tangible pride behind what they do and have accomplished. 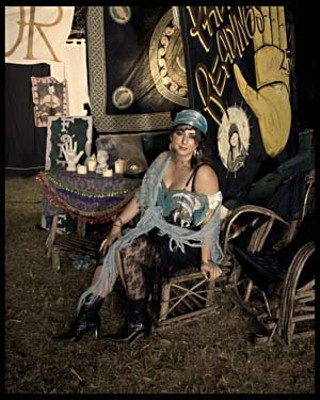 "I provide for my family in creative ways, other than wealth," she concludes. "It works for the community; it works for the family. I would love to see any of my kids be successful doing what they love to do and never have to throw another pizza or pour another beer."

Gill relates that her 14-year-old son, David, is anxious to start working at the Parlor, having already begun playing guitar, drums, and violin in his middle school orchestra, while 8-year-old Nevah takes piano lessons, and ...

Singer puts a finer point on it: "I think everyone in our family has the disease of multitasking." 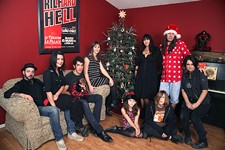 Open House
A lens into some local musicos' digs

The MonkeyWrench Manifesto
Volunteers of America: If you're feeling sinister, North Loop's newest wants you