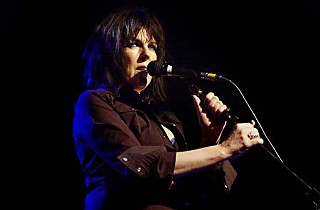 
Room near the La Zona Rosa stage was in short supply as the sold-out venue filled steadily with audience members whose "Sex and Drugs and Rock & Roll" T-shirts have long been purloined by their children. Anticipation for the sweet taste of Lucinda Williams' Little Honey was high, but what the faithful received was far more flavorful. Buick 6 roared with heavy guitars on "Pipeline" to open the show before the main attraction parked herself center stage sans guitar. Kicking off a two-hour set with "I Just Wanted to See You So Bad," Williams played a set list that read like a greatest-hits index, no surprise as her songs are like novelettes, lyrical stories sung by a master raconteur. Familiar – and old – titles rippled through the ecstatic crowd: "Happy Woman Blues," "Crescent City," "Drunken Angel," "Lake Charles," "Joy." It was like revisiting childhood stomping grounds with your best friend from grade school, singing tunes you both remember. "I had great teachers here, Lou Ann Barton, Stevie Ray," announced Williams, name-checking local peers from her days as an Austin busker after launching into the first new song of the evening, "Tears of Joy," and following it with Little Honey's explosive opener, "Real Love." Confessing over her Telecaster that the hugely popular "Honey Bee" was inspired by Iggy Pop's "I Wanna Be Your Dog," she ducked offstage after a smokin' "Righteously." The best for last: The lyrics she'd clutched in her hand before the show were for Guitar Slim's "The Things That I Used to Do," delivered in her twangy voice at its best – strong, rich, controlled. Rod Stewart's "Every Picture Tells a Story" and AC/DC's "It's a Long Way to the Top (If You Wanna Rock & Roll)" closed the encore, the neatest of tricks from the magician of modern Southern gothic, Lucinda Williams, before she disappeared into the black night.