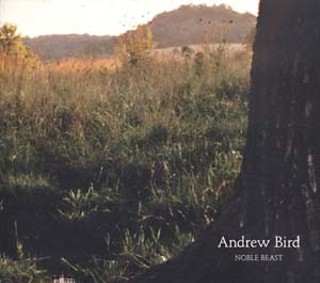 
Over the last decade, Chicago's Andrew Bird has created his own lexicon of pop music, layering spells of violin and guitar into novelistic labyrinths. The first half of fifth LP Noble Beast, buoyed by the brief, aqueous interlude "Uou," marks his most exquisite work to date. His Orbison-like croon is pushed to the forefront, guiding the movements, which makes opener "Oh No" and "Tenuousness" sound like jigsaw-puzzle pieces falling into place, gradually unfolding into a much bigger picture, while "Fitz and the Dizzyspells" and "Effigy" mirror the wide-lens grandeur of 2007's Armchair Apocrypha. Though less focused, the latter half has its moments, notably the romantic "Souverian" and "Not a Robot, but a Ghost," which crosses the songsmith's former vehicle, Bowl of Fire, with sideman Martin Dosh's kitchen-sink instrumentalism. With Noble Beast, Bird proves that he's a whistling Renaissance man for modern times. (Andrew Bird's show at the Paramount Theatre, Thursday, Feb. 12, is sold out.)