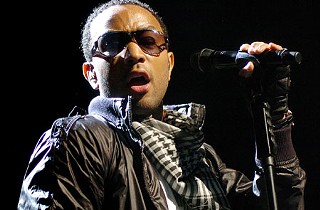 
That John Legend pleaded for the "Green Light" at the end of his 90-minute cuddle and tussle Friday night at the University of Texas' newly refurbished Bass Concert Hall attests to the slow jammer's stamina. Of course OutKast Andre 3000's middle-section rap via the song's visuals, projected on the stage set's video backdrop, jolted more stimulation than the entirety of the headliner's scream-accompanied performance, but then the track from Legend's third studio LP both for Sony and Kanye West's GOOD imprint, 2008's Evolver, wasn't the only conquest of the evening. Opening with the LP's demand for "Satisfaction" ("gimme, gimme, gimme"), the 30-year-old former piano prodigy, sessionista, producer, and singer brought the blood, sweat, and tears. The former was represented by a red belt bringing the only color to Legend's black-and-white ensemble, which stripped down to a wife beater to the arch delight of the females in the house, while the latter two owe to the lover man's work ethic and ladies' man earnestness. 2004's multiple Grammy winner, Get Lifted ("Alright," "Let's Get Lifted Again," "Number One"), proved the same as "Heaven" from sophomore disc Once Again: Contemporary R&B fills the same niche as romance novels. If she's happy, so's her bookmark. Legend ended his encores with Evolver's last cut, "If You're Out There," soundtracking projected illustrations of Nelson Mandela, Martin Luther King, John Lennon, Ghandi, Bob Marley, and Barack Obama. That group gets lots of people hot. 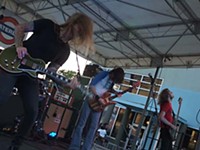