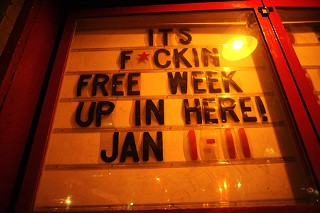 The Best Things in Life Are Free

Economically speaking, competition always benefits the consumer, and the Fuckemos' theme song broadcast from the Mohawk PA on Friday provided all the context necessary for the 2009 installment of Free Week. For the first time, local promotion enterprise Transmission Entertainment adapted the concept – originally conceived by Transmission principal and former Emo's booker Graham Williams – to include its chain of venues, Club de Ville, Red 7, and Mohawk. Red River anchor Emo's, in turn, is finding its big stage brimming as always, due in part to the venue's success at reconfiguring the downstairs area into a more intimate space by having acts perform on the floor. As such, Free Week has evolved into the Austin equivalent of MySpace, a vast social network that allows patrons to sample a seemingly unlimited amount of free local music and where compensation for participating acts – many of whom are playing gigs for both factions – comes only in the form of exposure. For OTR, the first half of Free Week held an embarrassment of riches. Scope Music Listings, p.74, and Club Listings, p.78, for a glimpse of what's still to come. 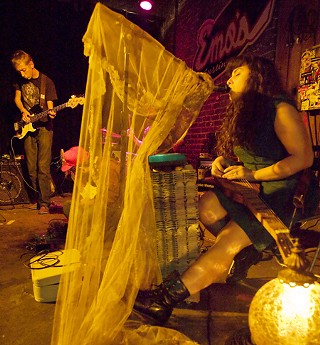 The cover at Hole in the Wall rarely extends beyond the tip jar, and after some serious technical difficulties setting up, the stage-shy San Saba County gradually knocked the rust off its tightly wound third LP, ... Though Cheating Was Never an Option, with alt.country gems "The Devil & Marie" and "Winter Solstice." On the other side of town, the capacity crowd yabbering inside Emo's front room tried but couldn't dim the ghostly psych-folk of San Marcos' Silver Pines, led by vocalist and slide guitarist Stefanie Franciotti. Taking a cue from Ghostland Observatory, the Lemurs rigged their own lighting, but the local dance rockers still need new material to rave up to the next level. Pataphysics' bastardized glitch pop, on the other hand, may be an acquired taste, but frontman Pat Healy had the crowd eating out of his hand, like an infomercial pitchman with Lucas Candy. 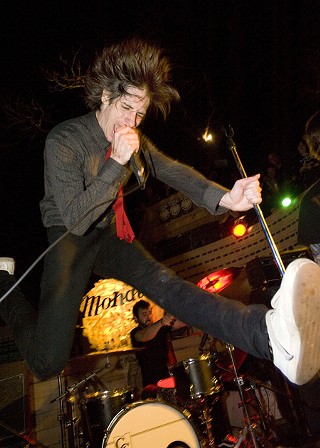 Previewing material from their forthcoming LP, Underneath the Owl, returning Free Week champs the Riverboat Gamblers drew a crowd that wrapped around Mohawk as elastic frontman Mike Wiebe incited a stage-crashing mob scene not seen since Iggy Pop & the Stooges (R.I.P. Ron Asheton) ransacked South by Southwest 07. (Gambler side projects Ghost Knife and Broken Gold crash Emo's on Thursday.) The real catch actually turned out to be opener Harlem. The Tucson, Ariz., transplants have quickly become beacons of Beerland's garage punk scene and rattled out gritty, scavenger tales of restless youth. The trio's destined for greatness if only it manages to keep from falling apart. Across Red River at Stubb's, also free, Balmorhea scored poignant instrumentals with patient perfectionism, a stark contrast to the wayfaring strangeness and crooked folklore of Precious Blood. 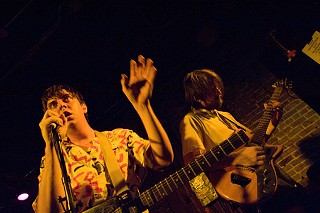 The outside bill at Emo's should've been a hoot night tribute to the Jesus & Mary Chain. Precocious trio Woven Bones mined Darklands, looping thick 13th Floor Elevator grooves over standing, tribal percussion. Opener the Astronaut Suit orbited more toward the realm of cosmic country, with an alternative streak that hinted at early Stone Temple Pilots, while the Tunnels siphoned 1960s psych-pop to little effect, but only the Black Angels' Christian Bland got completely lost in space, transmitting mere reverberations. Inside revealed a case of multiple personality disorder, with Prayer for Animals and Haunting Oboe Music skittering down parallel trails of dead, the former adding a healthy dose of heavy blues for good measure.

Kicking off a weekly residency at Red Eyed Fly, the raucous Southern grit of Pure Luck sounded like Skynyrd on the skids, with no less than four guitarists and two drummers, equaling the size of the audience. Part-time Butthole Surfer Jeff Pinkus swapped drinking songs with Robert Allan Caldwell and thumbed his electric guitar as if he were trying to make Dixie whistle. The crowd picked up at Emo's substantially after the Fiesta Bowl, though the newly minted Courses & Angles proved the runt of the litter, and the meandering indie pop of Masonic recalled Paramore, aged and seasoned by a decade or so. Frank Smith, who visits Mohawk on Saturday, delivered a heavy reckoning of gothic Americana, revealing an underlying darkness that would bode well at the Continental Club. 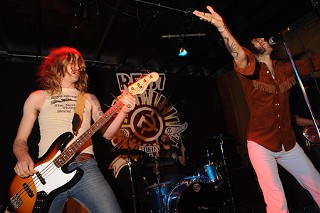 Red 7 may be undergoing some aesthetic renovations, but little else has changed about the hardcore pit. Arclight Records' newest signee, Pack of Wolves, set fire to a few psalms from Lamb of God's New American Gospel, adding a slightly Texas twist to breakdown-heavy metalcore that showed teeth on instrumental closer, "The Death of My Old Self." The Roller, meanwhile, kneeled at the altar of Sabbath, cutting bottom-feeder stoner-metal grooves that could potentially dig as deep as the Sword were it not for the monolithic, Neanderthal vocals. "Are you ready for the heaviest funk-rock showcase of the century?" beckoned headliner Scorpion Child at the start of its set. Apparently not. Scorpion Child is to Led Zeppelin what the Darkness was to Queen, an unintentionally ironic and entertaining knock-off, good for a laugh and probably some blow.

• Tuesday at Antone's proved especially blue as Derek O'Brien, Chris Layton, David Grissom, and Tommy Shannon, among others, provided a six-string send-off for Storyville's Malford Milligan. The powerhouse vocalist is relocating to Milwaukee, where he'll continue backing guitarist Greg Koch in Nation Sack, whose new self-titled album is due this spring. "I'm going to miss all the people in Austin, but I got to shake it up a bit," says Milligan. "I don't want to be a bandleader anymore. I just want to work for somebody." 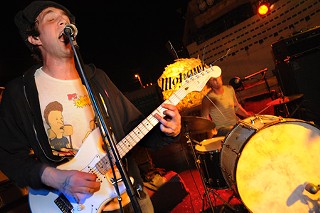 • The Austin Songwriters Group hosts its fifth annual ASG Songwriter Symposium this weekend, Jan. 9-11, at the Hilton Garden Inn (500 N. I-35), bringing together publishers, recording engineers, and wordsmiths such as Jimmy LaFave and Gurf Morlix in showcases and seminars. www.austinsongwritersgroup.com.

• Local drummer and producer Eldridge Goins recently underwent the successful removal of a tumor from his chest. A few of Goins' many collaborators – Carolyn Wonderland, Guy Forsyth, Suzanna Choffel, and Drew Smith's Lonely Choir – host a benefit at Antone's this Sunday, Jan. 11, to help offset his mounting medical bills.