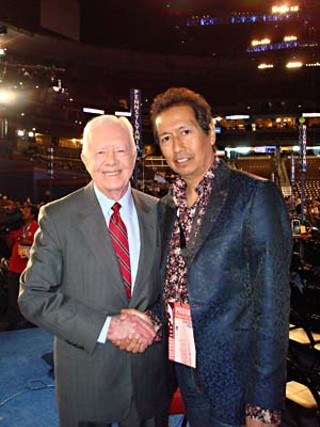 The Power to Change

From the housing crisis and Wall Street bailout to fluctuating gas prices and the presidential race, politics served as the unequivocal and unavoidable rhythm section for the soundtrack to 2008. Nowhere was that more prevalent than here in Austin, where local producer Bruce Newman of Barnstormers Music exposed archived recordings of Ashley Alexandra Dupré, the call girl who brought down former New York Gov. Eliot L. Spitzer, and Alejandro Escovedo made friends with Jimmy Carter at the Democratic National Convention and Bruce Springsteen in Houston.

After all, Mayor Will Wynn proclaimed 2008 to be the Year of Austin Music, and City Council unanimously passed a resolution to create the Live Music Task Force. With support from Troy Dillinger's equally diligent grassroots campaign, Save Austin Music, the task force presented a massive 15-page report of findings and recommendations in November, including the creation of a Music Department that would essentially transform live music into an economic priority. City Council has yet to take any action on the recommendations. Then, of course, there's President-elect Barack Obama, whose local music credentials included a rousing rendition of "Boogie Back to Texas" at the Austin Music Hall in February with Asleep at the Wheel's Ray Benson. After millions of Americans voted for change on Nov. 4, local promotion enterprise C3 Presents, responsible for September's impeccable Austin City Limits Music Festival, produced the afterparty of the decade at Chicago's Grant Park. According to the Nov. 29 issue of Billboard, the victory celebration also helped the company extend its contract for Lollapalooza with the city of Chicago for 10 additional events.

On the local front, Transmission Entertainment not only kicked up some dust and punk rock nostalgia in Waterloo Park with last month's Fun Fun Fun Fest and the Mess With Texas 2 free-for-all in March but altered Austin's booking landscape by acquiring both Red 7 and the yet-to-be reopened Radio Room. Direct Events, meanwhile, waved goodbye to the Backyard, and the Continental Club cemented its legacy by becoming an official landmark. Not too shabby considering the 5th U.S. Circuit Court of Appeals upheld the 2005 Smoking in Public Places Ordinance in March, making it even more difficult for bar owners to fill a room.

Bringing to life the art and music of Daniel Johnston, Zach Theatre staged the rock opera Speeding Motorcycle, featuring Glass Eye's Kathy McCarty. Bluesman Gary Clark Jr. went down to the crossroads for his silver-screen debut in John Sayles' Honeydripper, while Possessed by Paul James and Scott H. Biram both walked a hard mile in Slowboat Films' The Folksinger: A Tale of God, Love & Redemption, part of which was filmed at the Oaks, whose doors closed recently.

Celebrities such as Rachael Ray and Perez Hilton crashed another record-setting South by Southwest, alongside Lou Reed, R.E.M., Van Morrison, and Daniel Lanois. MTV even stopped by Beerland long enough to declare, "Lo-fi is all the rage." Too bad the production crew didn't stick around to witness the club's garage-punk scene, which has thus far produced the likes of the Strange Boys, Shapes Have Fangs, the Golden Boys, and transplants Harlem, to name but a few.

Ushering in the second wave of Texas psych, the 13th Floor Elevators' Roky Erickson exorcized demons live with the Black Angels and Okkervil River, both of whom of are now reworking and recording his archived material. Shearwater, which crafted its most grandiose album to date with Rook, and Ghostland Observatory stood briefly on the shoulders of giants – Coldplay and Nine Inch Nails, respectively. The Sword witnessed firsthand for whom the bells toll, touring worldwide with Metallica.

The Fireants (Photo by Shelley Hiam)

Grupo Fantasma backed Prince for Coachella and The Tonight Show With Jay Leno, anchored the inaugural Pachanga! Latin Music Festival in May, and earned a Grammy nod in the process.

Instrumental funk side project Brownout, on the other hand, continued to pick up steam, with guitarist Adrian Quesada concocting The Alchemist Manifesto via Ocote Soul Sounds. Dan Auerbach of the Black Keys lent instant credibility and production to Hacienda's Loud Is the Night, while Talking Head Jerry Harrison did the same for the eponymous debut from the Black & White Years.

As if there weren't enough new talent to be excited about, especially with the emergence of under-21 acts such as Sahara Smith and Fireants, the reunions of the Butthole Surfers, the Judy's, El Flaco, and the Reivers rattled a few skeletons out of Austin's storied closet.

Maybe the mayor got this one right.

Don't look now, but South by Southwest is rumbling in the distance. The 23rd annual Music and Media Conference, scheduled for March 13-22, has announced enough preliminary acts to fill a Christmas stocking, including Primal Scream, Memphis' 8Ball & MJG, Friendly Fires, Seinfeld aficionado Wale, and Ben Harper, backed by his Austin-based rock band Relentless7. That's not even the tip of the iceberg, though. SXSW has registered more than 10,000 applications thus far, 2,600 of which came from outside the U.S. The greatest increase in acts comes from South America and Latin American, along with parts of Africa, the Caribbean, and Eastern Europe. "We made a strong effort to encourage international acts to apply, but given the global economy, I was knocked out by the numbers," says Creative Director Brent Grulke, who's optimistically skeptical about landing the Faces' reunion. "This may be the first or last time these international acts come to the States, and their impression of America oftentimes comes from their experience in Austin. In a way, we're cultural ambassadors, and I take great pride in that."