A lens into some local musicos' digs

Tweet
print
write a letter
It's been an exhausting year in economic and social history, a time when the panic-stricken headlines "Foreclosure" and "Housing Crisis" fought for top billing alongside "Financial Meltdown," "Bailout," and "Blagojevich." Countless Americans were swindled out of their foundations by a clueless government, but only an Iraqi journalist threw shoes at our president. The American dream never felt so surreal.

In a town with so many struggling artists, "home" is open to interpretation – couch, co-op, compound? With that in mind, we asked a handful of Austinites in the music scene to open up theirs, to illustrate how those that nurture our economy's golden goose are living at the end of this year of historical highs and lows.

When it comes to Austin musical families, the Parlor's tree has many branches. Damon and Deborah Gill own the North Loop and Hyde Park Parlors and reside in a North Austin home with their children David, 13, and Nevah, 8. Deborah's daughter Singer Mayberry is the bassist/keyboardist in the Red Leaves, and Singer's sister Jasmine Mayberry played bass in hardcore punk band Signal Lost. Older daughter Autumn Spadaro and boyfriend Rich Cali (Red Leaves' drummer) moved to town three years ago. Jasmine, Autumn, David Lujan (guitarist in the Red Leaves), and Rich all bartend at the Parlor(s), while Singer does all of the live music booking for the North Loop location. Here, they gather by another family tree.

Amanda Jones and Chad Hopper of weirdo art-poppers Night Viking rent a two-bedroom house in East Austin, with a schnauzer and colony of outside cats. Jones likes "the fact that the doors open toward the side yards instead of the street, and with both doors open, you can run straight through the house from yard to yard." This shot came from last month's East Austin Studio Tour, when they turned the yard into a junk maze. 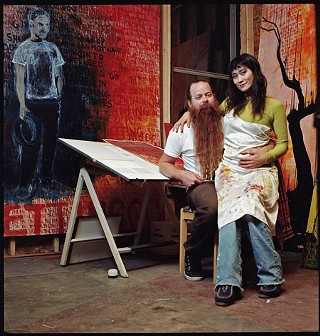 Bryan and Andrea Nelson's four-bedroom house off East Sixth has become a hub for the multiple projects and bands (Snake Trap, Little Bicycles) between them. It's also home to the Typewriter Museum. "We have made it into our weird, busy home," they relate. "Rumor is there was an anarchist school here, and for years it was a Slacker-style party house known as the Chicken Wire Ranch."

The Black Angels rent a four-bedroom house in South Austin, where they moved after their Eastside collective home was foreclosed on last year. Here, it's Christmas year-round, singer Alex Maas and guitarist Christian Bland concurring that this is one of the special things about the house. The worst thing? Maas: "It's not in space." Bland: "There's no pool."

Singer/guitarist Joe Diamonds and drummer Joey Jewels play in the psych-rock group Magic Jewels, and their two-bedroom house in North Central Austin is part of the Black Fontanelle Compound, "four surrounding houses that are occupied by close friends, artists, and musicians." "Due to current economic trends, artists living like this becomes an inevitability," Jewels relates. "We all hang out and share ideas and work on the several different projects we have going on. We have a zine/comic book, two record labels, like five bands that we all play in ..."

Jo Carol Pierce describes the South Austin home she shares with artist/musician Guy Juke as a "ranch house. It reminds me of Lubbock because it's flat, you know, and everyone has the big circular driveways. I think I'm just attracted to the space; seeing the deer run through the yard is just too much." She's speaking of the huge, cactus-filled back yard, where this picture was taken after a Fellini-esque procession.

Of course Ephraim Owens' house is as smooth as he is, the trumpeter's two-bedroom Cherrywood-area home beckoning spare, modern, and xeriscaped – chill, clean, cool.