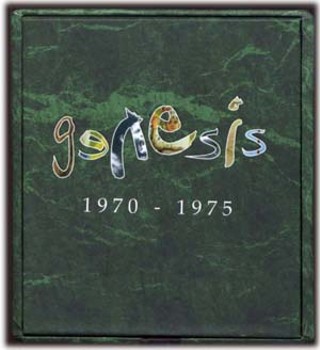 
In the beginning, Peter Gabriel was the singer, and Phil Collins wasn't even in the band. While most fans know Genesis as a stadium-filling top of the pops trio, this is the definitive document of its beginnings. Completing an upgrade of the group's catalog that began last year with two boxes (1976-1982, 1983-1998), the first comes last. A massive 7-CD/6-DVD undertaking, 1970-1975 contains five albums newly and, perhaps, controversially remixed, plus a collection of rarities. An accompanying audio DVD of each offers 5.1 DTS or Dolby Digital surround sound, as well as new interviews with band members and rare performance footage. Inexplicably, debut LP From Genesis to Revelation is left out. Otherwise, the set represents Gabriel's tenure with Genesis, a period when the band was at its most daring – undeniably British, arguably more folk-influenced than other progressive acts, and sporting one of the most provocative frontmen of all time. The music, for the most part, is still imposing. Sprawling, haunted "The Musical Box" and bounding "The Return of the Giant Hogweed" from 1971's Nursery Cryme demonstrate fresh imagination; it's no surprise to hear Gabriel claim heralded folkies Fairport Convention as an influence in an interview. In 1972, Foxtrot expanded the band's reach with the breathtaking "Watcher of the Skies" and cinematic "Supper's Ready." The whimsical "I Know What I Like (in Your Wardrobe)" from '73's Selling England by the Pound points the way to Gabriel's early solo work, but as daunting as it all can be, what's missing is equally puzzling. Not until Foxtrot do the video extras include anything besides interviews. Selling England, for example, features more than 90 minutes in concert, including a full show from Italy, 1973, where Gabriel, in full costume, combines the fantastic and frightening. One wishes for more like it, especially from Genesis' crowning achievement, '74's double-disc, The Lamb Lies Down on Broadway, which is given surprisingly meager video support, although the discussion of Gabriel's decision to leave the group proves fascinating. With a list price of $140, this box might be out of reach for many, and the meager liner notes dock it half a point further. Still, the music of early Genesis retains a distinctive charm that's never been duplicated.

Letters @ 3AM
Family Life in Genesis