Just as Jack Kerouac and David Amram fashioned the paragon of spoken word by fusing jazz with poetry in the East Village in 1957, Orville Gibson forever changed the modern guitar in 1896 with his only patent. Using one large piece of curved wood instead of several smaller ones for the sides of his carved archtop mandolin, he created a distinct pluck and resonance in the instrument's sentient structure that's become a universal conduit for creativity. Regardless of time or genre, the guitar is many things: best friend and confidant culling depths of deepest, darkest candor; arbiter of abstraction, inveigler of purity; and ultimately a reflection of its keepers' inner atmosphere. Like an axe, it splices through quiet, solitary moments, excavating material to shape singular, invaluable performances seen throughout the world.

In his chronicle of the love affair between player and instrument, photographer Ralph Gibson presents State of the Axe: Guitar Masters in Photographs and Words (Yale University Press, 183 pp., $24.95). Pairing black-and-white photos taken throughout his career with the words of guitar's many masters, Gibson illustrates his subject as "a medium through which intelligence speaks," as Les Paul says in the introduction. For gearheads and techies, Phil Taylor offers an exhaustive history of David Gilmour's Fender companion in Pink Floyd: The Black Strat: A History of David Gilmore's Black Fender Stratocaster (Hal Leonard Books, 160 pp., $32). Interested in never before released photos or the breakdown of the new tremolo bridge that was installed in 1983? Take a gander.

Seeing rock & roll as more than its performers and music necessitates a peek at its branding. The Beatles' "drop-T" logo and the Stones' lascivious, iconoclastic tongue will forever be recognized, just as the Misfits' crimson skull and the four bars of Black Flag represent a staunch choice to identify with America's seething subculture. Bodhi Oser explores these relationships in his new book, Band ID: The Ultimate Book of Band Logos (Chronicle Books, 420 pp., $40).

Although timelessness is becoming a rarity in music, the New York Dolls surely have a seat in that original assembly. Easily identified by their nominally epicene chrome lipstick logo, their robust sexuality, and their hunger for smashing punk rock into glam's shiny loins created a swagger that's kept listeners and fellow musicians respectful. New York Dolls: Photographs by Bob Gruen (Abrams Image, 158 pp., $24.95) is a satin-covered omnibus of photographs, interviews, and commentary that reveals the Dolls head-on, in the formative days of the frothy scene in New York that spawned a slew of greats. Photos capturing Johnny Thunders, David Johansen, and the boys at their peak are priceless alongside words from scene staples such as Debbie Harry and Iggy Pop. Some of the most talented musicians exist within a prism, and when they carve into what composes that greatness, they see that they're still the constant, much like the spirit of Orville Gibson throughout the guitar's evolution.

In State of the Axe, avant-garde guitarist Alan Licht identifies the dissonance in being a part of something huge by piecing out portions of oneself and the need for time to identify those things. "Guitar satisfies the duality of the desire for solitude and the need to be part of a collective," which is why, as guitarist Liberty Ellman says, "My axe can mend." 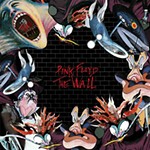 Woozyhelmet
Get Down (Record Review)