The Rule of Three

Graham Williams of Transmission Entertainment thinks of his brainchild Fun Fun Fun Fest as an "anti-fest," balancing out the local musical landscape. "Ours is at the perfect time of year weatherwise," he says via e-mail, "and is also not too big, so it feels more like a big club rather than a giant festival." Over the last three years, FFFF's lineups have legitimized the festival's place on the annual music calendar, and this weekend's addition of a fourth stage in Waterloo Park, plus an increased emphasis on comedy, and another strong bill – the Dead Milkmen, Bad Brains, Integrity, All – continue the trend. OTR asked Williams for his three keys to the fest's continual success.

1) "I'd say keeping it affordable. There are a million fests now and a lot going on in Austin, and with the economy and the like, people are looking for something fun and affordable."

2) "Balancing between original and appealing. You need to have good popular acts that people want to come see but also need to balance that out with up-and-coming talent. Otherwise, you're just feeding the same stuff to the audience that people see all the time at every other fest or at every club when they came through a few months before."

3) "Be unique. Not just in the bands you book on a fest but in the way you present your fest. We have a mechanical bull on Sunday, sumo wrestling suits, silk-screen poster art show, etc. Just mix it up."

For the complete exchange with Williams and a breakdown of other music festivals taking place this weekend, check out austinchronicle.com/earache.

In the spirit of the Sub Pop Singles Club, White Denim has introduced a new yearlong subscription service/fan club through Transmission Entertainment. For $30, subscribers receive a vinyl and digital copy of the band's dynamic new LP, Exposion (see "ACL Fest Sunday Reviews," Sept. 26), which gets officially released at Mohawk on Saturday as part of the Fun Fun Fun Fest aftershow lineup (see Music Listings), along with debut EP Let's Talk About It, alternate mixes, and other bonus fodder. At the rate the local trio is going, that's a bargain. White Denim recently finished tracking its sophomore LP, tentatively scheduled for spring 2009, at its Spartan trailer/studio in Driftwood. "It's soul-oriented," says vocalist/guitarist James Petralli. "There's a lot of Funkadelic's Maggot Brain and even some R. Kelly-style moves."

Austin's Sahara Smith is about halfway through the recording of her debut album with T Bone Burnett at his Santa Monica, Calif., studio. The 20-year-old songstress caught the famed Fort Worth native/producer's attention earlier this year with a batch of demos and is currently looking for a record label to underwrite the remainder of the sessions. "I love the quality of sound he captures, the way he's able to make the vocals stand up front while surrounding it with this rich texture," enthuses Smith, who enchants the Saxon Pub on Tuesday. "We both want to try to put a new spin on that traditional Texas sound of the Flatlanders and Guy Clark."

I Walked With a Zombie Pt. II

Turns out the Black Angels aren't the only ones reworking Roky Erickson's unreleased archives. In what's quickly becoming the Austin equivalent of Mermaid Avenue, Okkervil River will be interpreting the psych pioneer's field recordings for a future release. Currently, the local Black Sheep Boys are touring overseas. "I'm just trying to take in all of the material at this point," offers frontman Will Sheff, who first collaborated with Erickson at the Austin Music Awards in March. "There's definitely a great record in there."

Elsewhere on the 13th Floor, Casey Monahan of the Texas Music Office is working on a third volume of reprinted Erickson lyrics, Openers III, adding another 60 songs to the canon. "We've been going through each line together," says Monahan. "Roky doesn't remember the music to most of them, but every once in a while, he'll pull out a guitar and play something like 'I Believe in America' that I never thought I'd get to hear. It just blows me away."

• Due in part to his diminished relationship with his former labels, Bruce Robison has re-recorded 10 of His Greatest, to be released digitally on Tuesday through his Premium Records. "How other people interpreted some of the songs greatly influenced the way that I heard them as well," enthuses Robison. The Travelin' Soldier stops off at the Broken Spoke on Saturday.

• The Two Timin' Four's Eric Laufer, who was killed in a hit-and-run motorcycle accident in September, is being honored on Saturday with a memorial ride from the Central Texas Harley Davidson in Round Rock to the Nutty Brown Cafe, where a tribute show led by Wayne Hancock and Big Sandy & His Fly-Rite Boys, among others, kicks off at 2pm.

• Mothers of Invention drummer and El Paso native Jimmy Carl Black, who spent time in 1980s Austin with the Grandmothers and the Mannish Boys, died in Germany on Saturday of lung cancer. He was 70.

Mark Rubin of the Bad Livers cordially invites you to visit his secret society. The Americana trailblazer is curating a monthly, donation-driven open house at the Odd Fellows Hall (6809 Guadalupe), beginning Tuesday with the Two High String Band featuring Alan Munde and artists from Rocket Skull Art Studio. "We're trying to get back to one of the original missions of the organization, which was to serve as a community arts support," says Rubin. Following a few dates in the Pacific Northwest earlier this year, Bad Livers are currently completing the score to Six Gun, which premiered last month at the Austin Film Festival, and are tentatively scheduled to record a new album next year. 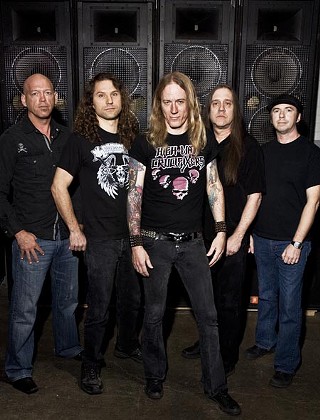 Considering that Guns n' Roses' Chinese Democracy might finally see the light of day, the timing couldn't be better for the return of Dangerous Toys (pictured). The local quintet's Southern slant on 1980s hair metal enjoyed a coattail ride to MTV with "Scared" and "Teas'n Pleas'n," plus stadium tours with Alice Cooper, Judas Priest, and Motörhead (see "Toy Story," Dec. 8, 1995). On Saturday, the Toys' original lineup commemorates its platinum anniversary (and eponymous debut) with a two-hour set at the Red Eyed Fly. "These songs are windows in time," assures frontman and Broken Teeth mouthpiece Jason McMaster. "They're old friends that are always going to be there for you." 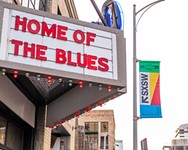 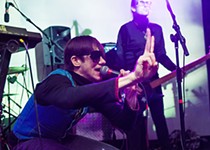