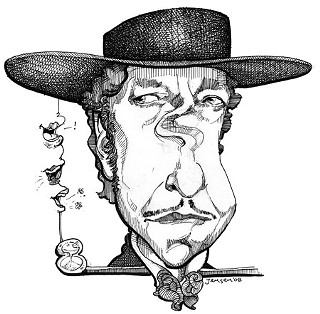 Denny Freeman is on the telephone from Kamloops, British Columbia. He's calling to say that as much as he'd like to, he can't talk. Freeman, guitarist in Austin's legendary Cobras with Stevie Ray Vaughan, has held the gunslinger post with Bob Dylan & His Band for more than three years and is currently on tour with them. He sounds a little nervous.

"I've got my own recordings, and I'm just a struggling guitarist in my own way, and I could always use the attention," he explains. "But in this outfit, they can make us uncomfortable about giving interviews. I think I called you just to say no."

Freeman and a handful of other notable Texas artists appear on the latest output from the Dylan camp: The Bootleg Series Vol. 8: Tell Tale Signs, Rare and Unreleased 1989-2006 (Columbia/Legacy). It's a collection of alternate versions and unreleased recordings, some in concert, from a period of bardic rejuvenation that's been as surprising as it has been fertile. Its availability in different configurations and formats reflects the confused state of the music industry more than anything.

Primarily, there's the double CD, 27 tracks sold at retail for $22.98, which is also available as a four-LP set for roughly $100. Then there's a 3-CD "Deluxe Edition" with 39 cuts, which comes in a hardcover slipcase and includes a hardbound book of singles covers from around the world, a 7-inch vinyl 45 of tracks already included on the discs, and, while supplies last, a poster for Theme Time Radio Hour (Dylan's satellite-radio show). The Deluxe Edition has a list price of $169.98 but is available for around $120.

No matter which version you choose, Tell Tales Signs unfolds as more than just a compilation of old tracks once left to gather dust.

Produced and compiled by Dylan's current manager and archivist, Jeff Rosen, it provides a glimpse into the creative process behind the seven LPs that rock's greatest singer-songwriter made up to 2006, as well as offering healthy insight into the authority he commands onstage. With the Deluxe Edition, one gets three versions of "Mississippi" recorded with David Lanois during the sessions resulting in 1997's Time Out of Mind, each different from the others and unlike the final version that appeared on 2001's Love and Theft. Oddly, no outtakes from the excellent latter album make it onto Tell Tale Signs, although the same can be said for the lesser Under the Red Sky (1990). Other tunes available for comparison include "Dignity," "Can't Wait," and the previously unreleased "Red River Shore." Unreleased songs, such as the foreboding "Dreamin' of You" and the late-night blues of "Marchin' to the City," are sure to garner the most interest.

Although Freeman wasn't able to speak about, as the record company puts it, "one of the world's most popular and acclaimed songwriters, musicians and performers," a few other Texas icons who make appearances on Tell Tale Signs did.

"We met in 1965 or 1966, and we've been friends ever since!" exclaims Augie Meyers, whose Vox organ was responsible for Doug Sahm's indelible sound in the Sir Douglas Quintet and the Texas Tornados and who took part in sessions for Time Out of Mind and Love and Theft. His reveal about Dylan is a surprising one: "He's a great piano player."

From his home in San Antonio, Meyers also confirms Dylan's fondness for Lone Star sessionistas: "They've got a lot of soul. It's about the feel, the gut. Players from other parts of the country don't have the same feel for country or blues. In the studio, he lets you do your own thing. He lets you play what you feel."

These sentiments are reinforced by Austin's Cindy Cashdollar, who's brought her potent skills on steel guitar and Dobro to acts ranging from Asleep at the Wheel to Ryan Adams. Her experiences during the recording of Time Out of Mind reinforce Meyers' reflections.

"He picks people for their style and their personality," she says, "their feel and their intuition. It was, 'Let's not sit here for hours and get sounds and set up mics – let's just play.'"

Cashdollar's 10 days in Miami working on Time Out of Mind left their mark.

"There were a lot of people at once," she recalls. "It's common to cut a record live, but to sit down and see that many people sounding and working so beautifully together just off the tops of everybody's heads [is unbelievable]. We had no charts; they just put the record light on, and you went. I remember on 'Red River Shore' there were lots of different takes tempowise and various combinations of things. To hear a tune presented in different keys, different ways, was brilliant and interesting."

One of Austin's most celebrated musicians, Charlie Sexton spent 3½ years with Dylan, both onstage and in the recording studio. "I would say that the luxury of my time with him was that we did a lot of recording," says Sexton. "I always felt that my job was to help him get what he wanted in a song. The show thing was always evolving in quite an amazing way, too. I was really 'at the master's feet.'"

"He's an awesome piano player. The session for 'Cross the Green Mountain' in particular defines my role in the band. I was playing acoustic [guitar], standing right in front of Bob, giving him something organic to focus on. What really made that track happen was when he began to play piano and it had to do with his phrasing. That's a reoccurring theme in his artistry. The first thing I tell people is that the first time you write one song that's as good as any of the songs that he's written, then you can do whatever you want with them. That's not even bringing in the fact that he's been doing some of those songs since 1964."

"'Cross the Green Mountain" is one of a handful of tracks on Tell Tale Signs that comes from a film soundtrack, in this case 2003 Civil War epic Gods and Generals. Another is "Tell Ol' Bill" from North Country (2005), which concerns the first major sexual harassment case in the U.S. and stars Charlize Theron. The latter song is an alternate version from the one on the original soundtrack, featuring local fiddler Elana James of the Hot Club of Cowtown. Her band opened a tour of minor league baseball stadiums for Dylan and Willie Nelson in the summer of 2004, and about halfway through the trek, she was invited to join Dylan for a few songs each night. James then spent the following spring as a member of his band. A few months after the tour ended, she was invited back for the North Country session.

"A few months after the session," she remembers, "a bunch of outtakes were leaked, which someone sent me last year. It's hilarious because you can hear the band discussing stuff. You can hear the whole process of working and reworking the song. It just so happened that I was on both the official take, in a major key for the film, and this alternate take, which is the same lyrics in a minor key with a totally different character, but there were several that I wasn't on at all."

Mention must be made of the booklet that comes with Tell Tale Signs, which includes animated and witty liner notes by Larry "Ratso" Sloman. Beside being a regular character in Kinky Friedman's mystery novels (another Texas connection!), Sloman wrote what's generally considered the best book on the bard, On the Road With Bob Dylan, an account of the notorious 1975 Rolling Thunder Review. While Sloman offers a great deal of insight into the process and experiences that went into these recordings, Sexton offhandedly gives one of the wisest explanations of the Dylan phenomenon.

"One of the things I learned from him is quite freeing," Sexton asserts. "He's almost fearless. Well, to us it seems fearless. But there's a method. He might be singing a song a certain way, and no one can get it. They can't understand it because he's truly unique in the way he perceives anything, and when I say anything, it could be a mailbox.

"My personal campaign that's not approved by the Bob Dylan organization is that I recommend we all leave him alone, because we all have the same things available to us. For whatever reason, he processes things much differently."

Twelve tracks that sum up The Bootleg Series Vol. 8

"Red River Shore," Time Out of Mind (disc one)

"Most of the Time," Oh Mercy (disc three)

"Everything Is Broken," Oh Mercy (disc one)