A Day in the Life

No event better encapsulates the spirit of this fair city than Health Alliance for Austin Musicians Benefit Day. For the third annual observance, 194 local businesses agreed to donate 5% of their sales on Tuesday and/or make a cash donation to HAAM, while more than 100 acts performed around town, raising awareness for the local nonprofit, which, to date, has serviced more than 1,200 Austin artists with low cost dental, medical, and mental-health services, provided by St. David's Community Health Foundation Leadership, Seton hospitals, and the SIMS Foundation, respectively. Last year, the event raised $180,000. "It's been a rough year for everyone, nonprofits especially," says HAAM Executive Director Carolyn Schwarz. "I'm still keeping my hopes high." OTR kept a tab of his Tuesday.

Whole Foods Cafe: Brownout's boundless Latin grooves and blaxploitation funk sorcery practically melted the lunching clientele with an eloquent eulogy to Isaac Hayes and the New Orleans tribute "Knowledge." According to guitarist Adrian Quesada, a new LP is in the works for 2009. Donation: $5.

Earl Campbell's Sports Bar at ABIA: Abi Tapia provided a sincere, acoustic send-off for jet-setters with songs of everyday struggle, reminiscent of early Jewel in their subtle charm. Music coordinator Nancy Coplin is looking for local holiday music for the airport intercom. Contact her at nancy.coplin@cityofaustin.org.

Waterloo Records: The Derailers' characteristically refined honky-tonk, like the title of the quartet's latest, was Guaranteed to Satisfy. Still strapped from the Austin Record Convention last weekend, OTR settled for a few budget selections, most notably Syd Barrett's The Madcap Laughs. Total: $43.

Antone's: House band for HAAM's appreciation party, organ-based trio the Greyhounds served up lounge grooves and blued-eyed soul on the rocks, including an ace reading of the Isley Brothers' "Footsteps in the Dark."

Waterloo Ice House: Graham Weber tore out a few pages from the Great American Songbook, somewhere between Dylan and Tweedy. "I feel kind of bad playing over the debate," he grinned. "We're all just jibber-jabbin'." Donation: $5. 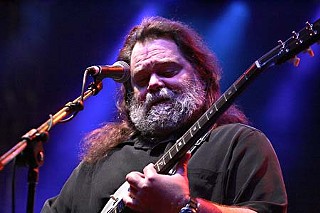 Three years after his epic comeback at Austin City Limits Music Festival, Roky Erickson returned to the Austin Ventures stage at this year's fest with a thunderous, career-affirming set of staggering Texas psych that drew approval from Spiritualized's Jason Pierce, among others. The desired encore didn't come until the following night at Stubb's, where Erickson joined Austin's Black Angels for a rendition of the 13th Floor Elevators' "Rollercoaster," which he hadn't performed in more than 40 years, and the trippy duet "Bo Diddley Is a Headhunter." That's only the tip of the iceberg. Manager Darren Hill has turned over 60 of Erickson's lo-fidelity field recordings, some of which were recorded at Rusk State Mental Hospital and released on Emperor Jones' 1999 collection Never Say Goodbye, to the Black Angels, who are reworking and re-recording 10 selections with Erickson at Cacophony Recorders for future release. "I get chills just thinking about it," relays singer and newly minted jug blower Alex Maas. The Angels are also opening for and backing the psychedelic visionary on a weeklong West Coast tour later this month, with a set that includes "Reverberation (Doubt)" and "Don't Fall Down" from the Elevators' 1966 debut. "Reteaching him these songs has been a bit of a challenge," admits guitarist Christian Bland. "But once it clicks and he gets that guitar on, he's completely in his element."

• Emo's owner Frank Hendrix has agreed to lease Emo's Lounge to El Sol y la Luna for five years with another five-year option, a deal initiated and brokered by the Downtown Austin Alliance. The popular South Congress Tex-Mex restaurant plans to move operations to Sixth Street and completely remodel the 5,000-square-foot property. "We could definitely use a really good restaurant in that area," laughs Hendrix, who acquired the space in March 2005 from a group of investors that included Mayor Will Wynn.

• Wayne Coyne of the Flaming Lips beams into the Alamo Drafthouse at the Ritz on Saturday for three screenings of his sci-fi freak-out, Christmas on Mars, co-directed by Austin's Bradley Beesley.

• The football gods have smiled upon the 2009 Austin City Limits Music Festival, which has been set for Oct. 2-4, to coincide with UT's bye week.

• Local saxophonist David Chenu, 30, was arrested Monday night by the Lone Star Fugitive Task Force in San Marcos after being indicted by a Comal County grand jury on Oct. 1 on six counts involving aggravated sexual assaults against a minor.

• The smoke appears to have finally cleared for KOOP Radio. The community outlet returned to its broadcast station on Airport Boulevard on Sept. 26 for the first time since the Jan. 5 arson attack that caused an estimated $300,000 in damages.