If writing about music is like dancing about architecture, imagine how difficult it must be to sign the otherworldly musings of the Mars Volta or Erykah Badu in real time. Such is the challenge facing Alive Performance Interpreting, an Austin-based network of American Sign Language interpreters that has worked with Austin City Limits, among other festivals, since 2002. "We really want to be the conduit delivering the message that's onstage to the deaf consumers so they have access to the whole vibe, the whole groove," says API's Lucy Brotherton, sister of longtime Robert Earl Keen guitarist and producer Rich Brotherton. "They can see the artist and their costumes; they can feel the bass and the beat. What we add is the story or the concept that's coming across vocally. It fills out the whole picture." API's preparation begins months in advance, finding current set lists for performers and accurate lyric sheets. "We take the content of each song and find what we call the 'meta-message' to deliver," Brotherton stresses. "Then we listen to the music over and over again until we get it into our minds and into our hands." 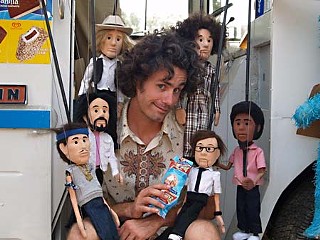 Courtesy of the Ice Cream Man

Since the last time Matt Allen (pictured) rolled through Austin for South by Southwest 08, the beloved Ice Cream Man has invested in a new truck ("Nute") and has logged more than 20,000 miles. That's roughly one mile per free frozen delight (see "What's So Funny About Peace, Love, and Ice Cream?" Sept. 15, 2006). "This summer has been bigger and crazier than ever," says Allen from the Monolith Festival at Colorado's Red Rocks Amphitheatre. Along with servicing more than a dozen children's hospitals, the Ice Cream Man has appeared at nearly every major music happening this summer, including Lollapalooza and last weekend's My Bloody Valentine-curated All Tomorrow's Parties event in New York, and he plans on adding the White Ghost Shivers' annual Halloween Ball and November's Fun Fun Fun Fest to his itinerary. This weekend he parks backstage at ACL 2008, where Allen hopes to sling some Amy's Ice Creams ("They're the only ones I'll ever scoop by hand"), giving out more than 2,500 treats gratis, and, if he's lucky, meet Pharrell Williams of N.E.R.D. "He has a clothing line called Ice Cream," Allen explains. "I'm really hoping to do some networking with him." • The Texas Commission on the Arts is accepting nominations through Oct. 5 for the 2009-2010 Texas State Musician (www.arts.state.tx.us/stateartist). OTR can think of no better representative to succeed Shelley King than Daniel Johnston. The acclaimed artist, who designed this year's ACL Festival poster, recently reissued his two Kramer-produced classics, 1990 and 1991's Artistic Vice, on his family-owned label, Eternal Yip Eye Music, with bonus tracks and available as a dual-LP set. He's signing copies at noon on Saturday in the Waterloo Records tent at ACL.

• ACL alumnus Billy Joe Shaver was indicted by the McLennan County grand jury last Wednesday for his April 2007 altercation with Billy Bryant Coker outside of Papa Joe's Saloon in Lorena, Texas. The 67-year-old songwriter was charged with aggravated assault with a deadly weapon, a second-degree felony, and unlawfully carrying a handgun by a license holder on licensed premises. If convicted, he faces 10-20 years in the slammer.

• Rolling Stone magazine hosts a free ACL aftershow on Friday at the Mohawk with the Cool Kids, Voxtrot, and Belaire. RSVP at www.rollingstoneextras.com/austinrsvp. Terry Lickona (pictured) was honored with the Jack Emerson Lifetime Achievement Award by the Americana Music Association last week in Nashville, marking his 30th year in the producer's chair for Austin City Limits, but don't expect to him to wax nostalgic for the occasion. "ACL is yet to hit its peak," he says. "I like to think of it as more of a work in progress since we have so many things going on right now." That includes construction of the show's new Downtown venue, which, upon completion in early 2011, will be booked on off-nights by Live Nation and will hold upward of 2,200 people across three levels. "The tapings will still be intimate affairs, but we will have the option of doing something larger if we're so compelled," offers Lickona, who's already confirmed Willie Nelson for the program's 35th anniversary season next year. Following Manu Chao's revolutionary stampede on Tuesday, ACL's tapings continue through the week with Drive-by Truckers (Friday, 3pm), filling in for Erykah Badu, along with Gnarls Barkley (Saturday), the Swell Season (Sunday), and Foo Fighters (Monday). All shows start rolling at 8pm unless noted otherwise. A limited number of tickets will be available. For more information, call 475-9077.

"Once the shock wore off that the band was actually doing well, the reality set in that we're probably having a negative environmental impact," quips Okkervil River frontman Will Sheff. The local indie act is going green on its current tour by purchasing NativeEnergy carbon offsets, bought with proceeds from specially designed eco-friendly stickers, and by encouraging fans to find alternate transportation to its shows. On that note, Capital Metro is once again providing free shuttle service to and from Zilker Park for ACL (see Community Listings for complete details), and for the second consecutive year, the Lady Bird Lake Hike and Bike Trail will be lit from Zilker Park to Lamar.