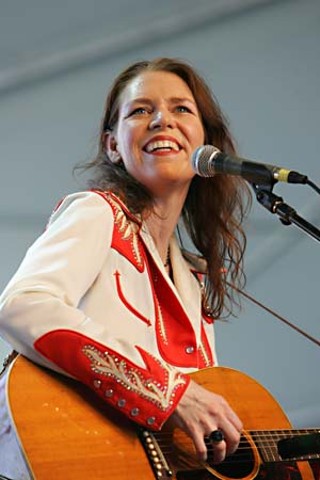 
Gillian Welch's path to folk and bluegrass was intuitive, if not always obvious. Though raised in Los Angeles, Welch felt an immediate connection to the old-time sound of the opposite coast, and no contemporary artist has done more to expand the genre over the past decade. Since her sensational 1996 debut, Revival, Welch has become a pillar of Americana, even as she bristles at the categorization.

"Yeah, how did that happen?" she laughs. "I don't even really understand what 'Americana' means. For me, if Bill Monroe isn't in there, then don't put me in there. But if Americana is broader – this thing that can include blues, bluegrass, gospel, rock, folk – if it's this great term to catch Johnny Cash and Bill Monroe and Conor [Oberst], all this stuff that partakes of the American tradition, then totally, I'm Americana."

It's been more than five years since Welch released her last album, Soul Journey, but she's remained a ubiquitous presence, collaborating with an eclectic range of artists including Oberst, Robyn Hitchcock, Del McCoury, and Jimmy Buffett. She and writing partner David Rawlings are also preparing his debut album as the Dave Rawlings Machine and hope to release Welch's own fifth effort early next year.

"We were kind of tired of our set and wanted to do something different, do some more performing," Welch admits. "What Dave and I do is so intense and so focused and so dual, just the two of us, that I feel like we kind of exploded in a way and realized that we really like playing with other musicians. I think you have to sometimes put other stuff into the pot, so I guess that's sort of what we've been doing – enriching the stew!"