Originally from Fort Worth but now based in Austin, Elizabeth Wills follows trails blazed by Joni Mitchell, but Fly, released earlier this year, distinguishes her with a simple, direct literary style augmented by a soulful edge. – Jim Caligiuri

Hailing from the math-rock capital of the world, Chicago's Sybris wraps angular guitars around the halting wail of firebrand Angela Mullenhaur to stunning effect. The quartet's sophomore effort, 2008's Into the Trees (Absolutely Kosher), takes root in the middle ground between the Kim Gordon-led moments of Sonic Youth's Rather Ripped and the Yeah Yeah Yeahs' caterwauling art-punk. – Austin Powell

After fronting the Nirvana-inspired outfit Verbena, A.A. Bondy disappeared into the Catskills and re-emerged in 2007 with a folk sound that's more Dylan than Cobain. His solo debut, American Hearts (Fat Possum), is rife with haunted ballads, deliverance unloaded in Bondy's gruff but weathered voice and acoustic strum. – Doug Freeman

Chicago's the M's are 21st century boys. The quartet's 2006 LP, Future Women, and this year's follow-up, Real Close Ones, both on Illinois indie farm Polyvinyl, pair Brit-glam swagger with tattered Midwest riffs and mine a sound that's past, present, and future. – Audra Schroeder

Led by singer-songwriter Rob Teter and featuring the engaging vocals and fiddle of Phoebe Hunt, the Outfit's a young quintet with a taste for gypsy swing, which grew out of deep reverence for the acoustic eccentricities of Walter Hyatt and revered Uncle Walt's Band. Their self-released Wanderin' is one of 2008's top local debuts. – Jim Caligiuri

If it seems like Nakia's 1970s soul revival has been a shot in the dark, tune in to the latest CD from stalwarts Steve Cropper & Felix Cavaliere. Meanwhile, grab a copy of Nakia's EP, Playing the Cards, and check out his meaty vocals and muscular grasp of the sound. Part Southern pulse, part Memphis-by-way-of-Texas attitude, all groove.– Margaret Moser

The Kills can play anywhere on earth, any time at all, and make it sound like midnight in Memphis with their menthol-cool squint and black-leather feedback. Alison "VV" Mosshart (sex) and Jamie Hince (bomb) are a permanently feverish party of two, infusing Velvets-inspired Delta squall and SoHo hurricane heart. Their 1:30pm ACL slot – prior to kick-starting the Butthole Surfers' Stubb's afterparty – should fry your little brain and then some. – Marc Savlov

Who doesn't love a sensitive gentleman in love? Torquil Campbell and Amy Millan's Stars pull heartstrings on the Montreal fivepiece's newest, digital-only EP, Sad Robots, which doesn't wear the same expression as last year's jubilant In Our Bedroom After the War (Arts & Crafts), but a little lightness might be just what we need these days. – Darcie Stevens 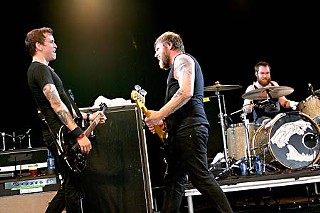 Against Me! (Photo by Gary Miller)

Against Me! became punk rock icons through their inhuman work ethic and guitarist Tom Gabel's emotive lyrics, and the Florida quartet's agitprop sounded like this generation's Clash or Fugazi. Though 2007 major label release New Wave (Sire) dampened that fire for some, it also marked the triumphant culmination of Gabel's 10-year journey from bedroom folk-punk to stadium-ready rock. – Daniel Mee

Sporting a musical aesthetic reminiscent of those notorious pulverized gourds, this L.A.-based quartet was a literal overnight success. Silversun Pickups have been touring in support of debut Carnavas (Dangerbird) since its release in 2006, and after a summer spent on the festival circuit, ACL will be their last set before returning to the studio. – Melanie Haupt

Cincinnati's Heartless Bastards kicked it up a notch for 2006's All This Time (Fat Possum), augmenting their distinctive bar rock with piano, delay, and gloss. Vocalist Erika Wennerstrom relocated to Austin last year and recently wrapped a new album with local producer Mike McCarthy. Rumors of the Bastards' missing heart have been greatly exaggerated: It's Wennerstrom's full, uncommon voice, of course. – Daniel Mee

Jennings earned his right to pass on the inevitable comparisons to father Waylon and mother Jessi Colter, but his 100-proof roots rock is a reminder that genes can fit snug and tight. Last year's The Wolf lifted him out of up-and-comer status, so here's the unofficial invitation to move to Austin any time. – Margaret Moser

The Raconteurs (Photo by Gary Miller)

Supergroup side project the Raconteurs bears the marks of its members' primary outlets, but the whole is more than the sum of its parts. Their two albums, including this year's Consolers of the Lonely, are more complex and exciting than many they've made apart.  – Daniel Mee

After a lineup shake-up that would have flattened other acts, the South Austin Jug Band emerged road-ready with the release of Strange Invitation earlier this year. Down to a trio now, the band replaced the happy bluegrass with songs that are more easygoing and supremely melodic. – Jim Caligiuri

With a sound as big and wild as the river that flows through its hometown of New Orleans, Galactic is one of today's leading purveyors of funk. The quintet added some hip-hop to the brew on its sixth, From the Corner to the Block (Anti-), with guest vocalists such as Juvenile, Gift of Gab (Blackalicious), Lyrics Born, and Ladybug Mecca (Digable Planets). – Jim Caligiuri

Back in its native South Carolina after a spell in Seattle, Band of Horses galloped past the latest herd of Neil Young wannabes with its stellar 2007 release, Cease to Begin (Sub Pop). The band's Austin show in February found lead singer-songwriter Ben Bridwell and his guitar-wielding posse offering a rock-ribbed lesson in harmonic reverb. – Dan Oko

Don't think Austin's Kevin Fowler ever forgot his rock & roll roots in bands like Dangerous Toys. His witty, country-fried anthems ("100% Texan") are equal parts Southern rock and Lone Star twang – even the legendary George Jones couldn't resist the lure of recording "Beer, Bait, and Ammo." Fowler's latest, Bring It On, includes "Long Line of Losers," a righteous soundtrack for barreling down Texas back roads in a pickup. – Margaret Moser

These twins from Calgary burst onto the folk-punk scene in the late 1990s with an appearance at Lilith Fair. Their music has since evolved into enticing pop with catchy melodies and crisp vocal harmonies, and 2007 Chris Walla-produced The Con highlights these traits and reveals them as complementary songwriters, as well. – Jay Trachtenberg

Like Jeff Tweedy and Thurston Moore, Foo Fighters frontman Dave Grohl is in the elite position of having been a major player in alternative rock's explosion into the mainstream and its metamorphosis into classic rock for Generation X. This progression became literal on 2006's In Your Honor and '07's Echoes, Silence, Patience & Grace, which made explicit the Fighters' roots in Queen, Floyd, and Zeppelin. – Daniel Mee