Too bad the Jones Family Singers aren't slated for Sunday morning service. Church will have to come early as the mighty wind of this Bay City, Texas, gospel hurricane transforms the WaMu tent into the house of the Lord. The Rev. Fred A. Jones shepherds this flock, including three generations of Joneses and Fred's teenage grandson banging drums. Not to be mistaken for a pious affair, this ministry will make you move. – Thomas Fawcett

Dyer's arguably the best blue-eyed soul singer in Austin. The songwriter's critically acclaimed 2008 self-titled album on Fat Caddy Records was recorded in a former snake-charming church turned studio in East Austin, and it brims with the spirit of Stevie Wonder and Al Green. Formerly of high-energy band Breedlove, this soul revivalist also holds down a popular local residency at Momo's. – Jay Trachtenberg

These Austin road warriors have been keeping the Southwestern sounds of Bob Wills' music alive with stunning precision for close to 40 years. Led by founding member Ray Benson and now featuring the sparkling vocals of Elizabeth McQueen, the sevenpiece has earned nine Grammys, and latest album Reinventing the Wheel proves Western swing ain't dead; it's Asleep at the Wheel.  – Jay Trachtenberg

What Made Milwaukee Famous (Photo by Gary Miller)

We miss our Milwaukee boys. It's been a full year of touring behind sophomore LP What Doesn't Kill Us (Barsuk), a pop lover's dream laced with Michael Kingcaid's Buckley vocals, guitarist Jason Davis' pitch-perfect harmonies, and the hook-and-release melodies we've come to expect from Austin's favorite indie rock fivepiece since 2004 debut Trying to Never Catch Up. Welcome home. – Darcie Stevens

After several false starts, local foursome the Strange Boys, led by brothers Ryan and Philip Sambol, finally put its raw, retro garage rhythms to wax with the help of West Coast punk imprint In the Red, releasing the 7-inch single "Woe Is You and Me." Their anticipated debut LP, And Girls Club, is due next year. – Doug Freeman

To paraphrase Newton, for every buzz, there is an equal and opposite backlash. Since emerging last summer as a blog darling, Vampire Weekend has endured its share of both, but January's eponymous XL Recordings debut lifted the Ivy Leaguers above the hype. The NYC quartet's impeccably catchy Afro-pop rhythms bolster its indie irony and post-pop-culture conceits, like Graceland for grad students. – Doug Freeman

Sunny Sweeney may attract initial attention for her looks, but all other considerations are brushed aside when she unloads her thick East Texas drawl alongside honky-tonk swagger. The local sweetheart of the rodeo turned heads with her 2006 debut, Heartbreaker's Hall of Fame (Big Machine), twanging through classic country heartache with a jolt of Outlaw inspiration. Austin's best answer to Nashville's leading ladies. – Doug Freeman

Good thing there's not a roof out there in Zilker Park, because Eugene Hütz has a tendency to blow that shit right off. The gypsy punks of Gogol Bordello don't know the definition of pacing, and still touring behind last year's Super Taranta!, an addictive dose of transcontinental bounce, Gogol shows no signs of stopping. Regard this heat-of-the-day set as a proving ground; there will be jumping, sweating, and ass-shaking. – Darcie Stevens

Wasn't this guy here, like, 15 minutes ago with his Pixies cover band, Is She Weird Is She White? The shaggy Nashville slinger once again graces the ACL stage, most likely in an ill-fitting suit, and we'll all be sweating in sympathy while secretly hoping he plays "Where Is My Mind?" – Melanie Haupt

The onscreen chemistry between the Frames' Glen Hansard and Czech pianist Marketa Irglova in the charming indie musical Once is pure magic, an intimate and convincing portrayal of modern love set on the streets of Dublin. As the Swell Season, the offscreen couple enjoyed a storybook ending, bringing the film's plaintive soundtrack to life and scoring an Academy Award for Best Original Song for the single "Falling Slowly." – Austin Powell

Our promise to you: big hair, lots of noise, and at least one 10-minute-plus guitar solo courtesy of Omar Rodriguez-Lopez. The Mars Volta destroys all notions of progressive rock, diving further into outright wankery on this year's fourth LP, The Bedlam in Goliath. While Cedric Bixler-Zavala sounds more like the spawn of Minnie Mouse and Serj Tankian every day, the Mars Volta continues its reputation of stretching the limits of "heightened" musical virtuosity. – Darcie Stevens 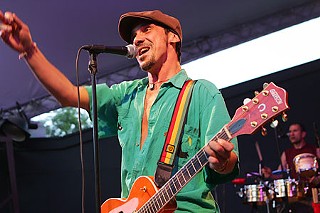 Last year's La Radiolina, Manu Chao's third studio-cooked solo bouillabaisse, fused both halves of the Paris-raised Spaniard's musical identity: Latin America's Joe Strummer and globe-trotting four-track Beck minstrel. The elfin "King of the Bongo" had fans scaling the walls of a sold-out Stubb's last year for a glimpse of the high-octane ska shaman. His ACL aftershow at the same venue this year plus a proper Austin City Limits taping rationalize Chao as one of the festival's most sought-after headliners. For an interview with Chao, see this week's Chronicle mother ship, "Rainin in Paradize." – Raoul Hernandez