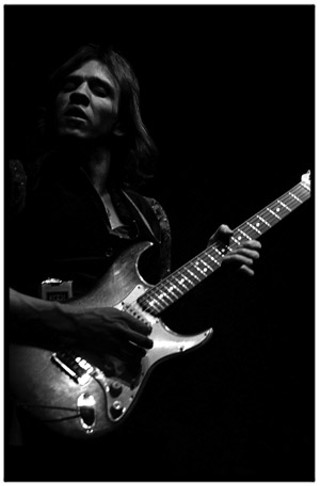 The Hole Sound Recording tapes aren't the holy grail. That doesn't exist, since Vaughan's studio output was finite and accounted for. As Bob Irwin commented, the best hope for quality SRV releases of the future remains in curated live material. Yet the historical interest of recordings from Vaughan's early years has legitimate meaning, especially to Austin, where Stevie Vaughan really was the hometown boy who did good. Here are five tracks that say something about the guitarist.

Title: "All Your Love"

This Otis Rush song was one of the handful of tunes Vaughan sang with Paul Ray & the Cobras. In the studio log, the band is noted alternately as Double Trouble and Brady's Bubble, perhaps in reference to Vaughan's alter ego, a hillbilly named Brady. Stevie's playing is confident with a song he knew well and full of the flourishes also heard on the 1980 version recorded live at Steamboat. Likely Chris Layton on drums and possibly Jackie Newhouse on bass.

Even when "Texas Flood" was just the song Stevie sang during his moment in the Cobras spotlight, he owned the Larry Davis-composed tune. Taught to him by Angela Strehli some years earlier, he'd honed it into his anthem during the Cobras years, a show-stopping display of guitar pyrotechnics that dazzled Montreux a few short years later, then the world. On this early studio version, the edge is crystalline. Sounds like Mike Kindred on keyboards.

The story goes that Vaughan heard this song by Little Milton on the jukebox at Stubb's in Lubbock while touring with Triple Threat. Like "Texas Flood," it became one of his signature tunes, a low and menacing guitar rumble brought to a stinging climax. His attack here is more free-form than structured, but he goes after the song in a way intended to make it his.

Title: "They Call Me Guitar Hurricane"

This song wasn't Guitar Slim's theme, but it was another tune Vaughan sent into the stratosphere with his chunky rhythms. "Well, they call me Hurricane, and I've come to play in your town," bragged the opening lyrics, the perfect introduction to his fireball Texas blues. He was honing his razor style on this early version, sometimes titled "They Call Me Hurricane," and the song became a staple in his sets.

Title: "Shake for Me"

Vaughan kept Howlin' Wolf close to his heart, one of the few bluesmen he didn't get to see at Antone's. Along with "Love Me, Darlin'" and "Howlin' for My Darlin'," this rollicking number was a favorite among blues rockers of the 1970s such as Duane Allman. "Shake for Me" gave Vaughan a chance to pick up that gauntlet and apply his exuberant, youthful guitar muscle to one of the all-time great blues riffs.