Across the Great Divide

Hacienda's Abraham Villanueva is with 'The Band' 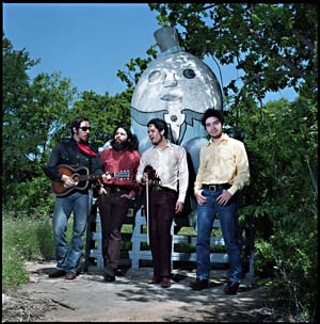 A band, together: (l-r) Dante Schwebel, with Abraham, Rene, and Jaime Villanueva (Photo by Sandy Carson)

It begins, like all great tales, having already begun. The fade-in of "Across the Great Divide," which opens the Band's 1969 self-titled sophomore effort, bridges from somewhere deep and distant before galloping into the joyous dirge of departure. True to the elusiveness of its name, the Band seemed an entity that was always already there.

The Band is an album sustained in the threads of leaving and returning, past and present, individual and collective. Its characters and narratives are uniquely timeless: Virgil Caine witnessing the plunder of Dixie; the drunkard's dream of Bessie up on Cripple Creek; Ragtime Willie pining for a Virginia rockin' chair from the sea. The album burns through Southern styles, from quivering ballad "Whispering Pines" to the honky-tonk stomp of "Look Out Cleveland" to the deep blues-funk of closer "King Harvest (Has Surely Come)."

Loud Is the Night, Hacienda's official debut set for release next month on Alive Natural Sounds Records, was produced by the Black Keys' Dan Auerbach and features members of Dr. Dog. While Hacienda's sound balances the Beach Boys and the Beatles, Villanueva points to rootsier inspiration.

Austin Chronicle: Fantastic album. I was almost expecting y'all to choose a group that was more brotherly or family-based, though.

Abraham Villanueva: [Laughs.] Yeah, we do love a lot of Beach Boys albums too, but this one we really like a lot.

AC: Do you remember the first time you came across the album?

AV: I was actually visiting Dante, our guitar player, when he was living in Vegas. This was awhile ago, but we were at a record shop, and he bought it for me and said, "You gotta check this out." That was the first time I had heard it. I think all together we kind of fell in love with it, and then individually, we each identify with it. I know that's one of the first albums I heard that really had piano the way I love to hear piano. It's very different from the piano you hear on a Beatles or Beach Boys record. It's based in rhythm and blues, I guess.

AC: Being a piano man, do you prefer [Garth] Hudson or [Richard] Manuel on the keys?

AV: Personally, I prefer Manuel, though I like them both. Garth really does a lot with countermelodies, and he goes all over the place. He does a lot of classically based stuff that's very intricate. But I think I prefer Richard Manuel, because as much as I love all that, having the solid piano rhythm is my favorite. That's kind of what I would love to be: a solid rhythm piano player. A lot of people use it as a lead instrument, and really, I think it works best as a rhythm, to lock in tight with the drums and the bass.

AC: Few bands can pull off having multiple lead singers but still have it cohere into a single vision.

AV: It's weird, but hearing the different voices, it feels like you can just keep listening to it over and over, and the mixture that a lot of albums didn't do was just the variety of tempos and rhythms. To have a really slow ballad like "Whispering Pines" and then something like "Look Out Cleveland" and "Up on Cripple Creek" – everything's kind of going up and down and back and forth. "King Harvest," I think that's my favorite song on the album. There's a great bassline going through it and a great rhythm, and it also has the keyboard going on underneath that. I'm not sure what they're using, but it sounds like an electric keyboard or maybe a piano that's processed. I don't know how they do it, but it sounds like the keyboard's underwater or something.

AC: This album also marked a pretty big change from Music From Big Pink, because Robertson was doing most of the songwriting. Is the songwriting more collective or does somebody lead that effort?

AV: We do it pretty collectively, more the way Big Pink was. Everything's kind of done as a group, so one person might have the melody or one person might have a full song, but it still doesn't have anything behind it. The four of us kind of sit down and write everything. Rene, the bass player, writes a lot of the lyrics. Everybody has their strengths, so we try to play to everyone's strengths. The way the four of us work, it's just all four of us writing together. It's a little weird.

AV: Yeah. Rene takes most of the lead, but Dante's got several songs he sings on, and then Jaime and I also have a song here and there. It's a little different, though, because a lot of times we sound very similar. We don't have the advantage the Band had of having three really distinct voices. The difference between Rick and Levon is huge, and between the brothers for us it could go either way. We try to find everybody's range and who would fit better on which one.

AC: Do you feel there's one singer in the Band whose vocals you prefer in the lead?

AV: I think I lean toward Richard Manuel, but I also love Rick Danko's voice just because I had never heard anything like that. I didn't know anyone could sing that way until I heard him. He's got a weird hiccup in his voice, but it fits in with the song. Richard Manuel, I just love his voice too, especially on "Whispering Pines" or even on Big Pink with "Tears of Rage." He does the falsetto really well, and I think he bases his vocals on Ray Charles, and I'm a huge Ray Charles fan.

AC: The Band recording in a house again seemed really to complement the looseness of their sound. Is that something that y'all were interested in when recording your album?

AV: We wanted to capture the same kind of atmosphere. When we started, we were just doing demos in our house, and it was just the four of us. We could record only one instrument at a time. So when we recorded this album, what we really went for was trying the four of us together. So the four of us played the basic tracks together, and then afterward, we might add in an extra instrument here or some percussion. Some of them are heavy on overdubs, and some of them we try to keep it as minimal as possible. But what's nice about playing and recording together, you really don't know what you end up with. Once you get comfortable, you just kind of play off of each other. It really gives it a collective sound and allows you such a variation of songs, which I think for the Band really helped them a lot. I think that's why it sounds so cohesive, and if they did it separately, you probably wouldn't be able to go all over the spectrum like they did. It seems like "Rag Mama Rag" shouldn't be on there, but I think since they're all playing together in the same room, you hear it, and you know it's the same five guys, and they're doing it again. So it's a band playing music, and not just a certain sound. Dan had sort of the same idea. He wanted it to sound like a band, together.