Denice Franke's Gulf Coast Blue (Certain) comes by comparisons to Eliza Gilkyson and Nanci Griffith honestly. Mark Hallman, the man behind Gilkyson's stellar recordings, produced this CD, and Franke sang backup for Griffith, as well as Lyle Lovett and Robert Earl Keen. Her tenure as one-half of the folk duo Hudson & Franke polished her songwriting to a high gloss, reflected beautifully in Blue. With heavyweight help from the likes of Gilkyson, Rick Richards, Spencer Starnes, and Robert McEntee, Franke's voice is dusty-sultry, and her songs of life on Galveston Island ring as bright as the sun rising over the Gulf of Mexico. Shotgun Party's self-titled release steps into the swing-trio wake, as if the Hot Club of Cowtown rear-ended the Damnations. Slap-bass man Christopher Crepps most recently thumped for the Bastard Sons of Johnny Cash, but it's the divine teaming of fiddler Katy Rose Cox (ex-Uncle Fucker) and singer/guitarist/composer Jenny Parrott that makes this roots-rock outfit crackle. Parrott reveals a marvelous feel for back-porch poetry in her lyrics; with good-humor titles like "Haunted House Bear," "Devil Town," and "Pickled Eggs," they'll appeal to Southern Culture on the Skids fans. The information that Patty David appeared on Star Search, the American Idol of the 1980s, isn't as impressive as who she challenged: powerhouse vocalist Linda Eder, still the best-kept secret among American female vocalists. No surprise then that David's recent CD, One Step Above the Blues, is a solid, well-constructed flight of pop-soul fancy. All 10 songs showcase her heartfelt songwriting, heavy, with an unabashed love for 1980s blues-rock and jazzy 1990s lounge not far below the surface. It's an appealing combination, bolstered by the pure pleasure of David's summery vocals ("You Stole My Heart," "Faith in Love"). 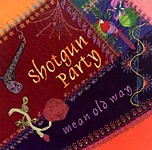