Former Tucsonites Harlem are sitting on a pretty crowded bench in Austin, "garage rock" having become the current nom de guerre for anything that sounds "lo-fi," gritty, or as if it were recorded on "druuuugs, man." The trio's not breaking any new lyrical ground on its local debut: The band sings about girls, drugs, and ... well, that's it really. Happily, there's an anxious, stuttering charm to Free Drugs, tightly coiled with punchy, solid songs and memorable hooks. The coulda-been-written-in-1965 bomp of "Caroline" and "Irresistable" are insta-catchy under the band's stripped-down ooh-ahs. "Psychedelic Tits" pays lip service to a girl's magical mammaries, singer Michael Coomers calling them "the color of a rainbow" over a witchy guitar riff, while "Think I'm Thinkin Bout" goes down like polished candy dug from the Cramps' sweaty armpit. "I'm on Drugs," true to its name, is a hit of tempo change and gunky fuzz in less than two minutes, and the "Red Herring" line, "Tell me girl where'd you sleep last night, and don't you lie," catches efficacy with a buzz-saw menace. In 12 songs, Free Drugs manages retro-replication without Harlem sounding confined to a two-car you-know-what. 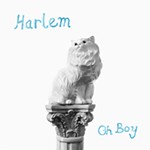