The Young and the Restless

The Strange Boys sealed a deal with renowned In the Red Recordings in wax, issuing 7-inch single "Woe Is You and Me" b/w "Baby Please Don't Go." The local garage punks first caught the label's attention during a brief tour of California last summer with Jay Reatard, who produced what was supposed to be the Boys' label debut. "I didn't really care for it," confesses singer/guitarist Ryan Sambol. "It was a lot of new songs, and I hadn't really finished them. When I came out of it, I already wanted it to be different. We probably have about four or five records now that haven't been released." After fleshing out the new songs live and writing a few more, the fourpiece returned to the studio earlier this month with Orville Neeley. "We did it in his garage, and we did it right," Sambol says of the album And Girls Club, tentatively scheduled for release in January. "I think you can go through our new record and see where I got everything from, but maybe we're starting to put a bit more of ourselves in there." The Strange Boys reunite with Reatard in Houston, following his stop at Red 7 on Sunday.

Don't Tread on Me 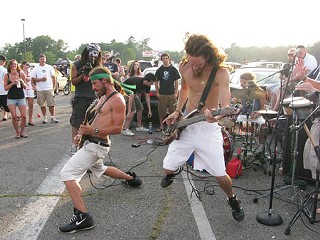 The target demographic for Full Service is pretty easy to pinpoint: alternatively inclined youths, aged 12-24, capable of getting down to both 311 and Snoop Dogg (see "Texas Platters"). For the past month, the local jam band has tailgated alongside the 4:20-enthusiasts' joint tour, playing generator-powered, guerilla-style sets in the parking lot before each show. "Daily confrontation with police and security can get pretty stressful," relays guitarist/vocalist Bonesaw via e-mail. That's putting it mildly. The quartet was barred from setting up in Holmdel, N.J., and two members were arrested and held overnight in Brooklyn after being busted with a spliff that was supposedly confiscated by a parking-lot security guard and given to the band. It's a good thing the group brought along its own crew to document the trip (www.fullservicemusic.com). "Our website hits per day have tripled, and so all seems to be going according to plan!" says Bonesaw, who's handed out more than 1,200 demos to date. Full Service gears up for one last takeover Saturday at the sold-out Backyard (they're sitting out Sunday's show there), with an official homecoming at Flamingo Cantina on Friday.

The Hold Steady's latest, Stay Positive, debuted earlier this month at No. 30 on the Billboard 200. That's a lot of free exposure for Decoder Ring Design Concern, the local multidisciplinary design company that constructed the album's artwork. Co-founded in 2004 by Christian Helms and American Poster Institute President Geoff Peveto, whose work with the Hold Steady's Craig Finn dates back to his days in Lifter Puller, Decoder Ring has collaborated with Spoon, the Decemberists, and Wilco, along with designing cover art for What Made Milwaukee Famous and Modest Mouse. The creative differences between the leaders of the Hold Steady and the latter were particularly striking. "Craig is a really easy guy to work with," says Helms. "He's much more logical and linear in the way that he works on things: A leads to B leads to C. Whereas Isaac [Brock] is exceptionally brilliant but very lateral. With him, A leads to fish leads to green." Keep your eyes peeled for the Decoder Ring's latest Hold Steady show poster, Aug. 6 at the Parish.

• Jon Dee Graham was involved in a single-car accident late Friday night while returning home from a gig in Dallas and had an emergency splenectomy on Monday. As of press time, he remains in intensive care at the University Medical Center at Brackenridge but is expected to make a full recovery. For more information, see austinchronicle.com/earache and www.myspace.com/jondeegraham. Fellow True Believer Alejandro Escovedo, meanwhile, postponed shows this week due to acute exhaustion. The Real Animal should be well rested for his Aug. 7 appearance on the Late Show With David Letterman.

• James Henry, revered owner of the now-defunct Henry's Bar and Grill on Burnet Road, which helped launch the careers of Wayne Hancock and Don Walser (see "Song for My Father," Sept. 29, 2006), died Wednesday, July 23, due to an undisclosed illness. He was 71.

• Following nearly a year of Internet-based activity, Snake Eyes Vinyl reopens at its new location, 1101 Navasota, on Sunday with an all-day sludge-fest, featuring Doom Siren, Panther Zora, and 26 Beers among others. Elsewhere, vinyl emporium BackSpin Records hosts a three-day summer clearance sale this weekend, with everything in the store 20% off and DJs spinning around the clock.

• Local label Western Vinyl recently secured the North American distribution of the third solo album from J. Tillman of Fleet Foxes, Vacilando Territory Blues, which arrives in stores Jan. 9. "I feel like this incredible album just fell out of the sky and landed on my lap," enthuses WV head Brian Sampson, who lulls ghosts from the machines as Bexar Bexar at the Hideout on Tuesday with labelmate Balmorhea and San Marcos' This Will Destroy You.

• OTR's Next Big Thing on 101X airs live this weekend from Lollapalooza in Chicago, 6-10pm. Tune in for backstage interviews with locals Black Joe Lewis & the Honey Bears, the Octopus Project, and Okkervil River.

Not everyone has the opportunity to see James McMurtry on nearly any given Wednesday at the Continental Club. Enter VideoRanch.com, a virtual music venue that allows patrons to create their own avatars, interact with other users, and watch live performances from Americana artists such as Hayes Carll. Bands are filmed against a green screen at a studio in Santa Cruz, Calif., and simultaneously embedded into the program atop a virtual stage. It's like watching private detective Eddie Valiant in Who Framed Roger Rabbit? Last Wednesday both McMurtry and local newcomers the Dedringers visited the Ranch. "People were able to watch us sign albums for them and chat with us after the show," says Jonny Burke of the Dedringers, which used the gig as a virtual CD release party for the band's debut, Sweetheart of the Neighborhood. "It definitely felt like we were playing in the future."