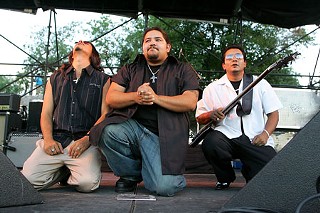 "We really try to get out there as many ways as possible," confides Los Lonely Boys' bassist Jojo Garza. "We're down to play anywhere we can at any time if it's going to help our career and help us reach more people." For the release of the San Angelo-based trio's third studio album, Forgiven, earlier this month (see "Band of Brothers," July 4), that translated into appearances not only on The Tonight Show With Jay Leno and in Zilker Park for KGSR's ongoing Blues on the Green series but also at four Wal-Mart stores across Texas. "It gets us onto the shelves, a part of the whole Wal-Mart chain," Garza adds. "It's not the only way we could reach people in those places, but it definitely makes it a lot easier. It's a beautiful thing. It doesn't feel unnatural at all."

Wal-Mart is now the largest music retailer in the States, holding an estimated 22% market share, which has allowed the corporation to sign exclusive agreements with artists like Bryan Adams, Journey, and reportedly, AC/DC. The Eagles' comeback double disc, 2007's Long Road Out of Eden, which was sold exclusively through Wal-Mart for $11.88, was the third bestselling album of the year, pushing more than three million copies. The store is also exclusively offering the Los Lonely Boys' new DVD, Live at the Fillmore, a two-and-a-half-hour set from 2004, while its version of Forgiven boasts two bonus tracks.

"I don't think that exclusive deals necessarily create new fans or new sales for a band," offers John Kunz, owner of Waterloo Records, which carries Forgiven on double vinyl. "What it does is it shifts fans from buying music from where they normally would to where they have to go to get it." Like many music outlets, Waterloo purchases and restocks roughly a dozen titles that are exclusive to stores like Wal-Mart and Target. It's also a member of the Coalition of Independent Music Stores, which formed Think Indie, a distribution company that services about 200 indie retailers, including End of an Ear, with its own exclusive content, ranging from Tacks, the Boy Disaster's Oh, Beatrice EP to Roky Erickson & the Explosives' Halloween: Live 1979-1981.

More so than exclusive releases, which are usually reserved on the national level for more established artists, it's the pricing at big-box retailers that's costing traditional record stores their collective lunches. Beginning in 2006, Best Buy shifted its emphasis for loss leaders – items sold below cost to entice consumers into making more profitable purchases – toward indie bands, placing albums by the likes of the Arcade Fire and Broken Social Scene on sale for $7.99. Escalating matters further, Billboard reported in March that Wal-Mart is proposing a five-tier pricing scheme that would list hit albums at $10 and budget titles at $5.

"The chains can sustain the loss because they're making up for it elsewhere," says Encore Records, Video & Apparel's Charles Lokey, who often purchases new videos for the store through Fry's Electronics and Wal-Mart, as they're normally priced $4-5 cheaper than through traditional wholesale distribution. "If I sell 500 things at a $5 loss, I'm in serious trouble. The price pressure they put on us is continuous. I simply can't compete on that level, but Wal-Mart will never carry a lot of our products. When any serious metalhead sees our selection, I guarantee they're not going to shop elsewhere for it anymore. ... Think globally. Shop locally. What more can you really say?"

Rappers are only as good as their self-proclamations. New Orleans native Lil Wayne, who notched more than one million copies of his latest, Tha Carter III, in its opening week, has billed himself as the Greatest Rapper Alive since 2005. In comparison to blockbuster arena productions by Jay-Z and Kanye West, his 90-minute set at the Travis County Expo Center on Thursday felt like one of his underground mixtapes, a woozy and oft-kilter career-spanning assortment littered with verses from his countless cameos, including opener Shawty Lo's "Dey Know (Remix)" and Juvenile's "Back That Azz Up." The multi-instrumentalist (he played an electric guitar and bass for a total of two minutes) delivered more punch lines than Richard Pryor, his "Pussy Monster" freestyle rivaling the comedic ingenuity of CB4's "Sweat From My Balls," while his codeine drawl and radioactive imagery in hits like "Fireman" and "Lollipop" could've glowed in the dark. Equally captivating and confounding, Wayne's a man of his word.

Daniel Johnston doesn't need to prove his indie cred. Case in point: The manic songwriter kicks off a seven-date European tour this week billed as An Evening With Daniel Johnston & Friends that will feature roundtable performances from Yo La Tengo's James McNew, Scout Niblett, Mark Linkous of Sparklehorse, Teenage Fanclub's Norman Blake, and Manor transplant Jad Fair (see "Strange but True," Jan. 25), all of whom will also serve as Johnston's backing group. "This is a dream band for me," relates Fair, who suggested former Velvet Underground drummer Moe Tucker for the occasion. (She was amenable but had other commitments.) "It's going to sound great." Due to scheduling conflicts, no American engagements are expected.

• Runners take your mark, and cue "Eye of the Tiger." Austin is one of only four U.S. cities going the distance for the Nike + Human Race, a worldwide 10K marathon on Aug. 31, whose proceeds and registration fees benefit three charities, including the Lance Armstrong Foundation. Along with a commemorative tee, each participant gains priority placement for a free performance at the finish line (Congress and 11th Street) from Ben Harper & the Innocent Criminals later that evening. Sign up at NikePlus.com, and follow the Chronicle's Sports blog, the Score, for updates.

• Alejandro Escovedo's now-infamous rendition of "Always a Friend" with Bruce Springsteen & the E Street Band in Houston earlier this year has been digitally released in both audio and video formats through Columbia Records as part of the Boss' Magic Tour Highlights, with proceeds benefiting the Danny Federici Melanoma Fund. Rumors of a possible reunion at the Frank Erwin Center in October were dismissed by venue officials.

• Willie Nelson will appropriately lead the last waltz at the Backyard on Oct. 26, closing the doors on the venue's 16th and final season. In other Nelson news, wife Connie and daughter Paula are slated to appear in Michael Madsen's new political thriller, Conflict of Interest, along with Saxon Pub owner Joe Ables, while 19-year-old son Lukas has replaced Jody Payne on guitar in the Family Band. 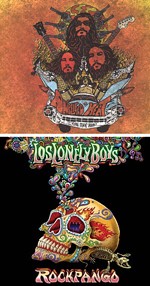 Mart Growth
Will the city stand up for its neighborhoods and urban vision?