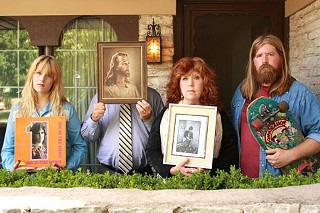 While Brothers and Sisters' sound hearkens back to the harmonizing icons of the 1960s and 1970s, Will and Lily Courtney's inspiration originates closer to home. Their mother, Cynthia Clawson, is a renowned gospel singer, releasing more than 20 albums in her career and garnering five Dove Awards from the Gospel Music Association. In 1981, she won a Grammy for Best Gospel Performance for her recording of "The Lord's Prayer."

A preacher's daughter, Clawson grew up singing in churches and graduated from Howard Payne University in Brownwood, Texas, with a degree in vocal performance. She eventually caught the attention of CBS, which hired her to host the musical variety show The CBS Newcomers. While her powerful and soulful voice quickly established her as a leading gospel artist, her socially progressive views began to clash with the increasingly politicized religious movements of the 1980s.

"I got in trouble," she says with light laugh. "[Family Research Council founder] James Dobson, years ago, took me off all his radio stations because I was singing with a gay men's chorus in Dallas, and he didn't like that. Politically, I'm just not where so many of those people are, and they know it. When I sing something like 'What About the Children,' which is an anti-war song, they get very upset and won't let me come back to their church to sing again. And that's okay. I've found a lot of people that are like me."

Among those who still eagerly welcome Clawson's music is the congregation of the former Tarrytown Baptist Church. Now known as the Sanctuary, Clawson and her husband, writer and actor Ragan Courtney, became the de facto pastors almost a decade ago and contribute their artistic flair to the services.

"Our worship services are kind of odd," Clawson admits. "I'm there singing, and Ragan is preaching. We just did a play that Ragan wrote."

Last March, as the crowds cleared town following South by Southwest, Will Courtney brought his mother to Cacophony Recorders to produce her new album, Episodes. Ray Jackson joined the sessions on pedal steel along with Li'l Cap'n Travis' Jeff Johnston on bass, while Will and Lily sang backup harmonies to their mother's rich, Joni Mitchell-like voice.

"It was great for both of us," says Clawson. "I've been showing him music for so long, since he was a baby. In the womb I would put a headset on my belly so that he could hear music, everything from Crosby, Stills & Nash to Willie. I had really been wanting him to do it, just because I trust his taste as an audiophile.

"Of course," she adds with her familiar chuckle, "he got it from me!"