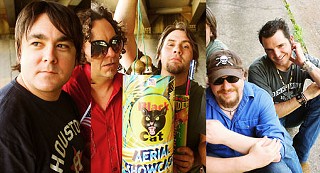 An odd calm settles over the infield of the Houston Astros' Minute Maid Park. The low roar of last Friday's sellout – 42,000 – recedes into white noise, absorbed in the manicured grass and infield dirt.

Reckless Kelly's Willy and Cody Braun and David Abeyta take a stand in front of the visiting dugout, the defending World Series champion Boston Red Sox staring out at the trio as the stadium stills. Eyes closed, Cody sets his familiar black cowboy hat across his chest and harmonizes with his brother into the first bars of the national anthem.

Opening baseball games has become a favorite byproduct of Reckless Kelly's success. The Austinites hold sports a close second to their passion for music, baseball being chief among them. On the field prior to the game, watching batting practice, the guys are as wide-eyed as the kids trying to score autographs from Manny Ramirez.

"This never gets old," says Abeyta with a sense of wonder.

Over the past decade, Reckless Kelly has risen into the major league of Texas artists behind its brazen roots rock, big guitars pitched into infectious melodies and ripped with fiddle. With Bulletproof, the band's debut for power indie imprint Yep Roc Records, the local quintet stands on deck for a national breakthrough.

Tonight, as the trio rounds third base on their rendition of "The Star Spangled Banner," Willy thrusts a fist in the air at "land of the free." The stadium swells in a single emptying of its lungs, applause climaxing against the closed dome. Play ball.

Willy Braun steps casually through the back door of Fifth Street's Lucky Lounge, the sudden glint of afternoon sunlight slicing into the barroom darkness. He slides his sunglasses up onto his Red Sox ball cap, eyes blinking as they adjust, and takes a stool at the bar. The bartender greets him by name as she passes him a bottle of Corona. The constant click of dominoes keeps time from the corner table.

As he waits for his brother, Willy sips the beer and watches Tiger Woods mount another impossible comeback at the U.S. Open. Against doctors' orders, Woods walks his 90th hole, one shot down to unlikely contender Rocco Mediate. Cody comes into the bar just as Woods sinks 18 for the birdie and tie, pushing the round to one more hole and his eventual win in possibly the greatest tournament ever played. Indomitable. Bulletproof.

There's nothing spectacular or flashy about the Braun boys. They both carry athletic builds that have settled solidly into adulthood and an easygoing attitude of all-American, good ol' boy charm. Cody, one year older at 31, strikes a slightly more mature poise, but when the two begin bantering back and forth and finishing each other's sentences, the kinship couldn't be clearer.

"There's always brotherly battles out there," laughs Willy. "We get into our fights every once in a while, but it's always something stupid, and it's always fine the next day. I think, overall, we've learned to ignore each other when we have to and to choose your battles. We've never really punched each other or anything."

"No fistfights yet," smiles Cody.

Nowhere is the brotherly chemistry more apparent than in their music. Cody's fiddle and electric mandolin cut perfectly into the rough grain of Willy's voice, the product of playing together their entire lives. Raised in the small Central Idaho town of Challis, the entire Braun clan was a musical culmination. Grandfather Musty Braun passed his musical career to their father, who made Muzzie Braun & the Boys a family affair. Cody was sawing fiddle in the Western swing band by age 7, with Willy singing along by 5, performing at the Grand Ole Opry and on The Tonight Show. Younger brothers Micky and Gary, now of Austin's Micky & the Motorcars, followed suit.

"Our mother's the only person in the family that didn't play anything," admits Willy.

"Yeah," Cody adds with a chuckle. "She was a damn good road manager, though."

Cody and Willy began shaping Reckless Kelly in their teens, bending their father's country sound into their own rock inspirations. After a futile stint in Bend, Ore., the quintet found a complementary scene to their music and moved to Austin in 1997. Abeyta soon added his guitar fireworks to the lineup, and Jimmy McFeeley brought his bass grooves to bear on Jay Nazz's ferocious drums.

"Coming down here and being in the clubs and all the college kids and that kind of party scene helped amplify everything," Cody says. "The live show really came around to a real party atmosphere and just having fun and getting people to whoop it up. We were getting a percentage of the bar for a while at Lucy's, so we encouraged the shots quite a bit." 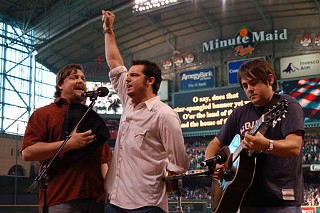 From the opening guitar lick of their acclaimed 1998 debut, Millican, Reckless Kelly has shot its twang through with raucous energy and pop hooks, earning the group four Austin Music Awards for Best Roots Rock act. Beneath the hard-drinkin', hell-raisin', road-runnin' anthems, Willy's songwriting bites with a bittersweet restlessness that matches his gravel-ripped voice. Songs such as "Desolation Angels" from 2003's Under the Table & Above the Sun and "Dogtown" on 2005's Wicked Twisted Road unfold poetic narratives pushing against an understated, universal desperation. Bulletproof maintains those classic Reckless Kelly elements but raises the bar in both substance and style. It's their most accomplished effort, yet even before its release last week, the album had brewed a storm of controversy among fans.

"I just want to say thank you for your support for us over here ... having good red dirt music here is all that keeps me sane," writes Pfc. Jake Marlin on the Reckless Soldiers message board that the band created for soldiers and their families. The sentiment is echoed across the site.

When Reckless Kelly began streaming "American Blood," the tale of a young wounded soldier's homecoming from Iraq and condemnation of the government that sent him there, the Braun brothers knew the backlash was inevitable. While the band remains a fixture at military-base benefits and accompanied the release of the song with a statement reasserting its support of the troops, debate sparked almost instantly on the group's forums and MySpace page.

"If there's a bad review or a critic that doesn't like us, we wouldn't normally issue a statement or anything," Willy says. "But when it's coming from fans and families of people in the military who aren't really expecting it out of us, the last thing we want them to think is that we don't support them or understand what they're going through.

"The people that are talking about it in a negative way are veterans or soldiers that feel like if you're not supporting the president, the commander in chief, and the mission at hand, that you're slapping them in the face, which isn't the case as far as we're concerned. We're just doing the good ol' American freedom of speech thing, but we can totally understand their position on it."

The response that "American Blood" has sparked is testament to the power and unavoidably raw emotions provoked by the song. Atop a thick, steady guitar riff approximating helicopter blades, Willy's voice spits the harsh vitriol of Steve Earle, "Copperhead Road" 2.0, as he howls the closing verse:

Now Johnny can drink all day 'cause he's 23.

He donated his legs to the worldwide land of the free.

While he stares through the tears with American blood on his hands.

The unexpected political turn has drawn fire from some of the band's fans, the shock exacerbated by the fact that its fan base leans as conservative as it does liberal. The song explicitly castigates President Bush ("He sits at home with his feet on his desk while the boys got theirs in the sand"), a bold statement considering that the band played for both of his inaugurations.

The sting of spite in "American Blood" is balanced on Bulletproof by the wrenching disillusion of "God Forsaken Town." The Hurricane Katrina ballad, co-written with Robert Earl Keen, draws across the other side of desperation. For a band whose reputation was built on highway odes and beer-raising heartache, both songs carry a weight that signals Reckless Kelly's maturing to an impressive new point in the band's career.

The songs also reflect the charged and changing attitudes of contemporary America, of a society suddenly forced to reluctantly face political realities. Bulletproof embodies the zeitgeist of our culture that would rather keep drinking, rather keep running, but can no longer ignore the consequences, regardless of political position.

It's a recognition that just a few years ago mainstream audiences refused to accept, evidenced by the blacklisting of the Dixie Chicks across country radio. Yet as the toll of war has begun to return home, it's impossible to separate these issues from our personal lives. If part of Reckless Kelly's popularity springs from the genuine everyman appeal of its material, then "American Blood" and "God Forsaken Town" reassert the shared and relatable turmoil of the modern American experience.

"We don't really want to be known as a U2-type band. We're not political," emphasizes Willy. "I think the main thing is that we've caught people off guard just because we've never done anything like that before.

"I know that the last people I want to hear telling me their political opinions are Alec Baldwin or Bruce Springsteen, but those are also the people that can get a message out and get people talking about it. ... They may not know, or we may not know, anything about what's really going on over there, but we have a little bit of the public eye, so at least we can get people talking about it and forming their own opinions on it."

The guitars rumble like a diesel engine. The packed Antone's crowd roars in return as Reckless Kelly launches into its new, Woody Guthrie-inspired single, "Ragged as the Road." Bottles jut into the air, held aloft equally by college kids and graying fans who have followed the band since its Wednesday happy hours at Stubb's.

This is Reckless Kelly at its best, unfettered and fueled by the hometown audience. McFeeley and Abeyta bookend the stage with contrasting figures, the former steady as his bass bores holes into the latter's sizzling guitar solos, dug out from under his hunched-over frame. Clad in black, Cody dwarfs his mandolin and carries the harmonies while Willy slings his acoustic guitar and rouses the crowd.

Braun patriarch Muzzie joins his boys onstage to trade verses on the Irish stomp "Seven Nights in Eire," grinning beneath his ball cap with drink in hand. A gypsy-outfitted Micky Braun steps up to take the mic on "Nobody's Girl." Family reunions rarely meet this much approval.

Individually, there's little that would seem to distinguish any of the five members from their fans, just normal guys humbled to be making music for a living. Yet onstage, Reckless Kelly is another force altogether, as charismatic and potent as its namesake, the soundtrack for driving hard and fast down American back roads, with the radio turned up and the throttle thrown down, unflinching and fearless. Indomitable. Bulletproof. 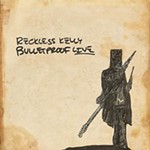 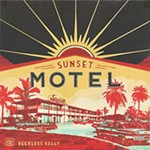