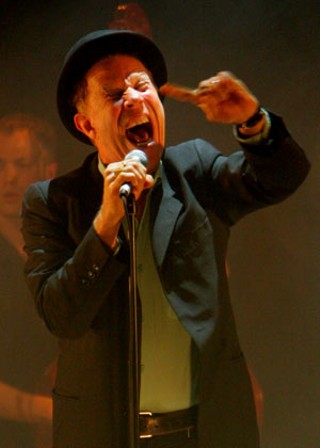 
Monday night in Dallas, Tom Waits walked onstage, and it got 10 degrees hotter. There were reports that Mr. Waits himself wanted the air conditioner turned off during the show, but there he was, dressed in a black jacket and bowler, lit red as the devil, stomping around in front of a towering wall of loudspeakers. Resistance was futile, so we all became the heat with him. Waits' career has been somewhat of an anomaly: He's nearing 60, and his catalog only gets stranger and more experimental (2006's Orphans), but his voice still sounds like the perfect combination of sawdust and gravel. For close to two hours, his band, including son Casey on drums, held down the pages for our storyteller, and though there was little in the way of banter, save for a few very Waitsian asides about Texas food, the songs became a thread. "Way Down in the Hole" and "Innocent When You Dream" from Franks Wild Years, "Anywhere I Lay My Head" from Rain Dogs, and "November" from The Black Rider fleshed out Waits' midcareer works. There was the stomped "Get Behind the Mule" from Mule Variations and dazzling bark of "Eyeball Kid," for which Waits donned a bejeweled hat and became a human disco ball. He took to the piano for a glorious rendition of "Invitation to the Blues," from 1976's Small Change, but that's where the early stuff ended, sadly. Throughout the show, Waits grabbed maracas, wielded a bullhorn, strapped on a guitar, and sweated along with the rest of us, right up until the encore, which included "Make It Rain" and a growled "Jesus Gonna Be Here." It was a relatively low-key affair, but St. Tom made it worth the pit stains.

Lowside of the Road: A Life of Tom Waits
Waiting for the Man