Inside the parallel universe of Japan's Boris Agonizingly it burns my eyes – distortion

A drop runs down on my cheek slowly

It trembles from within

A mask of gray smoke clouds the Mohawk stage, thickening the mid-October air. The three members of Boris slowly crystallize out of the haze, as if stepping through the gauze of a parallel universe. Cradling her guitar delicately, Wata's petite stature and refined elegance stand in stark contrast to the towering stack of Orange amplifier cabinets behind her.

The tsunami of transoceanic tones that opens "Rafflesia" hits all at once, an unrepentant shock wave of low-end frequencies quaking the concrete. Vocalist Takeshi alternately contorts both ends of his truncated, double-neck guitar, while guest guitarist Michio Kurihara carves through the surrounding chaos with thick brush stokes of molten psychedelia. When Atsuo finally strikes the massive gong behind his drum kit, he does so as if holding the hammer of the gods, spiteful and commanding.

Boris thrives in this realm where the distinction between music and noise, or even creation and destruction, blurs beneath a veil of distortion. For more than a decade, the Japanese trio has translated the primal sexuality of the Stooges and Black Sabbath's heavy nuggets into its own language of amorphous metal, expressible only at deafening decibels.

The sheer magnitude of Boris' encore rendition of "Farewell" proves too much for the Mohawk, shorting out the circuit board as a look of bewilderment and mild disgust temporarily transfixes the band. A few minutes pass before Boris and Kurihara attempt to resume the song. The power fails again, ending the night in an abrupt and awkward moment of silence.

"Multiculturalism means nothing in Japan," posits author and former Teardrop Explodes frontman Julian Cope in the introduction to his Japrocksampler: How the Post-War Japanese Blew Their Minds on Rock 'n' Roll. "The Japanese thrust everything they discover from the outside world through their own singularly Japanese filter, mainly resulting in a peculiar copy of the original, but quite often bringing forth something magnificent and wholly better than that which had inspired it."

"With downtuning and maximum volume, we experience great feedback that takes us to heaven," Atsuo wrote via e-mail and a translator, before landing in Austin for South by Southwest 2007. "We experience drone in the name of rock."

Likewise, the scope of the band's frequent collaborations with such prominent noise luminaries as Keiji Haino and Merzbow, not to mention White Heaven's You Ishihara, traverses the depths of Japan's longstanding underground psychedelic scene, a movement inspired by the Flower Travellin' Band, Taj Mahal Travellers, and Les Rallizes Dénudés, and impeccably documented by P.S.F. Records' Tokyo Flashback series. What makes Boris' music ineffable is their unrivaled ability to seamlessly bridge such diverse realms.

"We don't defy categorization; we just don't think it's possible to categorize," Atsuo clarified. "We don't want be one side of two, such as merchandise and work, individuals and others, or peace and chaos. Those situations change as the sounds come out. ... Everything is connected. It is essentially the impression of chaotic sound.

"There are no boundaries."

Former Melvins bassist Joe Preston didn't recognize the name on the package when it arrived on his doorstep in 1995, an odd piece of fan mail postmarked from Japan. Inside, the lone figure behind Thrones found a live video of Boris' original fourpiece lineup pillaging a few Melvins covers and a handful of originals. For Preston, it was like looking into a fun-house mirror, his former band's songs bent through a prism of monstrous, Jap-psych missives.

"I was shocked that they had ever heard my work," recalls Preston. "And I was blown away by what they were doing with it."

By the end of the year, Boris, solidified as a trio, joined Thrones for a handful of shows around the Pacific Northwest. "You could tell they hadn't been so influenced by American sounds and culture," notes Greg Anderson, who caught one of the gigs with his Sunn O))) counterpart, Stephen O'Malley, and began reissuing Boris' back catalog stateside through his label, Southern Lord Records, in 2001. "At that time, there weren't many bands playing superheavy stuff like that. It was pretty amazing." 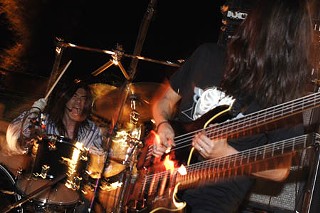 Nearly a decade after their first encounter, Sunn O))) and Boris reunited in Seattle in October 2005, collaborating over a four-day-long period before a joint West Coast tour with Thrones. "There was a distinct language barrier between the two groups," says Anderson of the sessions. "The album was basically made through communicating with music and expression rather than language."

"There was a lot of telepathy going on when we were playing the music," echoes O'Malley from France. "We were all operating on a pretty similar wavelength."

The resulting Altar, released on Halloween 2006, is a glorious temple of doom, an epochal testament to the sessions' exploratory and intuitive spirit. Volcanic opener "Etna" melds Sunn O)))'s brooding ambience with Boris' seething psych, Wata's guitar erupting like the song's namesake inspiration and pulling both collaborators into uncharted territory. The bowed bass and sparse percussion of "N.L.T." simmers solemnly, while the somber melancholy of Jesse Sykes' ghostly vocals plunges stark piano ode "The Sinking Belle (Blue Sheep)" deeper into the abyss before the 15-minute instrumental "Blood Swamp" concludes the peregrination into the heart of darkness.

"It rolls like the boulder that Sisyphus is condemned to push uphill for eternity, only to have it fall back down each time it approaches the top," testifies former Soundgarden guitarist and Altar session hand Kim Thayil in the liner notes for the expanded, three-LP version. "These six somber sides are the jet sonic soundtrack of disaster and the floral pitch of doom in the low tempo of dread and shadow."

Austin Chronicle: The last time we spoke, you described Pink as the future of rock. How would you describe Smile in relation to that idea?

Atsuo: Pink was not only a new sort of rock but also the end of rock music for Boris. Smile is less about being a different kind of rock & roll and more so just an experiment. I don't even think of it as a statement by the band or as music in particular.

AC: Why are there times on Smile when songs end abruptly?

Atsuo: If you listen to the album and consider it in normal musical terms, it will strike you as weird, but that's the first problem of listening to it that way. That's a normal reaction if you're expecting a normal musical experience.

Atsuo: After Pink, we had this idea that we would get rid of any sort of originality. Whether we were doing a drone project, rock project, or acoustic project, I felt like there was always a Boris identity in it, and that made me uncomfortable. By covering someone else, we're erasing part of this identity, and hopefully in the process we'll find something new.

AC: What was it like to tour with Michio Kurihara for the Roaring Silence Revue? Could you sense the change in dynamics when you played some of Boris' older material with him?

Atsuo: I don't consider Kurihara's instrument to be a guitar. The way he plays it destroys that idea. I hear it as a special kind of noise. It's not as though Boris had a third guitarist; it was as if we had this whole other entity in the group. Boris' sound is a series of steps. It has a roughness to it. With Kurihara, though, it's like he sends sine waves through the music, smoothing out some of the rough edges. He adds another dimension to the music that it didn't have before. He has his own sensibilities, and he brings in ideas and sounds that weren't even imaginable to the band. I get the same feeling when we play with Merzbow.

AC: How do you feel Japan's isolation and island culture has influenced the band's perspective?

Atsuo: With Pink's release, Boris did a lot more touring, so we had many more opportunities to think about or recognize ourselves as Japanese. It made us more conscious of that reality. At a certain point, I realized that a lot of the things around me were copies or fakes of the original imports. I became very conscious of this, and it began to influence the way that I approached music. Starting about the time I was in high school, I became really interested in learning about real rock and roll, the originals, and that continued for many years.

Now I've grown tired of that pursuit. I'm looking back at these imitations and examining what they mean. A lot of the things I used to find cheesy are having a real impact on me, and I'm experiencing it in an entirely new way. As a Japanese, if I can absorb some more of this fakeness, at the end of the day I might discover a new identity and something really original. For me the word "fake" doesn't have a negative connotation. I've been vegan for many years and eat fake meat; I wear fake leather shoes. At this moment in time, there is no real difference between what is fake and what is real.

There's only one constant in Boris' cosmos. Every album ends with a crematory process, fading into a smoldering heap of distortion and decay. It's as if the band is preparing to rise from the ashes again and again, like a phoenix, only with a different sound and philosophy.

"They're unafraid to try something unexpected or inappropriate in order to expand their own framework," says O'Malley. "They're constantly introducing new cards into the game while retaining the characteristic of their music."

The band's latest, Smile, marks another quantum leap, at times exploring more traditional pop melodies in songs like "You Were Holding an Umbrella," while also assimilating aspects of 1980s hair metal into "Laser Beam" and "Buzz-In." Boris took the transmutation one step further in allowing engineer You Ishihara of the Stars to produce and mix an alternative version of Smile, which was released in Japan by Diwphalanx earlier this year.

Dissecting and reassembling the album's individual components, Ishihara's shape-shifting tape manipulations recall that of Teo Macero during the electric fusion era of Miles Davis, only harsher, louder. The most drastic change occurs in "Statement." Retitled "Messeeji" and resequenced to open the album, the original gets stripped down into a throbbing drum-and-bass pattern, then elongated and interjected with Wata's cleaving guitar lines. It sounds like Ishihara strained the album through his own singularly Japanese filter. Deep within the vortex that divides the two versions of Smile lies the very essence of Boris.

"Translation is only a tool for the listener to picture the music, so we don't have to really worry about the problem," Atsuo wrote last year. "Ultimately, we try to make music that lets people discover something new no matter how many times they listen to it. We aren't expecting listeners to understand our music. We just want to create an experience for them." 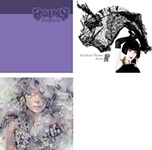