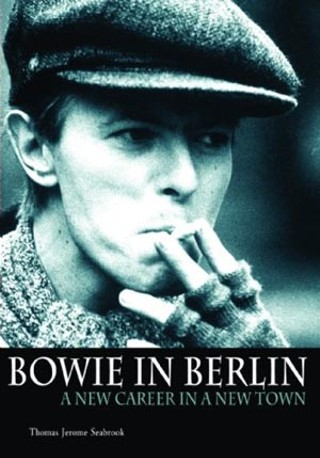 Bowie in Berlin: A New Career in a New Town


Berlin's a "city made up of bars for sad people to get drunk in," David Bowie was once quoted saying. In his first book, British author Thomas Jerome Seabrook takes on the period between 1976 and the dawn of the 1980s, when David Bowie and Iggy Pop tried to kick L.A. drugs in Berlin. The drug part didn't quite work out, but between the two, they ended up creating five seminal albums: Bowie's Brian Eno-helmed triptych of Low, Heroes, and Lodger and Pop's The Idiot and Lust for Life. Without any firsthand interviews, Seabrook pieces Bowie's career together with middling results, courtesy of his tendency for tangents. Though we get a detailed song-by-song rundown of each album, there's very little sense of Bowie's life at this time, and even less about the secondary titular character, Berlin. Seabrook's most comfortable with studio talk, and he does a good job of explaining Bowie and Eno's revolutionary, experimental rounds in the studio under the influence of the German kosmiche scene. Their alliance (Seabrook calls it their "drawn-out game of one-upmanship"), was born of Berlin's mysterious sway. Perhaps that's why creative types are flocking there once again.