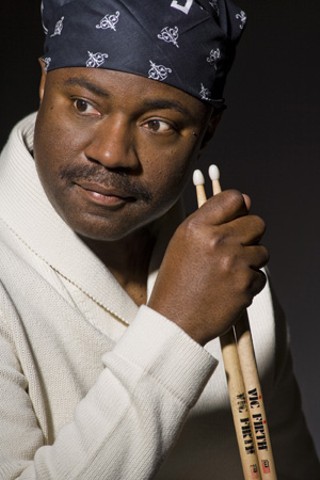 So states Lenny White, 58, matter-of-factly from his hotel room in L.A., where he's out recording with a thrash-metal band. Usually described as a "versatile" drummer, White's highly respected in jazz circles thanks to a résumé that includes playing on Miles Davis' monumental Bitches Brew; working with legends Jackie McLean, Freddie Hubbard, and Joe Henderson, among many others; and having recorded on more than 300 sessions. He's best known, however, for his 1970s tenure with Chick Corea and Return to Forever.

"Stanley [Clarke], Al [Di Meola], and I have played together in various forms and have talked about a reunion for years. We finally got Chick to agree," chuckles White. Although the band hasn't played together for decades, White claims the initial rehearsals went particularly well. "Some things you just don't forget."

This particular configuration of Return to Forever lasted from 1974 to '76 and recorded three albums together. They toured extensively, and, strange as it may seem today with the music market sliced into narrow niches, their albums spent months on the pop charts.

"Music back then was more cross-categorized, more bipartisan," contends White, "many more styles were represented. Michael Jackson and Return to Forever were considered pop music at the time."

The mid-1970s were the most fertile period for jazz-rock fusion. A slew of Bitches Brew alumni were at the forefront of the new electrified sound, most notably Herbie Hancock with Headhunters, Wayne Shorter and Joe Zawinul in Weather Report, John McLaughlin's Mahavishnu Orchestra, and of course Return to Forever.

"Besides superb musicianship, which we all shared, RTF was the most personable of all the fusion bands," claims White. "Everyone in the band talked about music to our fans. We invited them in."

Much has changed on the musical landscape since RTF disbanded, the advent and proliferation of hip-hop for one. How will this evolution influence a band whose sound is defined by a particular era? White, who currently teaches at the New School in NYC and is busy writing orchestral music to be performed in Russia later this year, is more than aware of these changes, having played and recorded in a multitude of settings over the years, including work with Big Daddy Kane and LL Cool J.

"You can't live in a vacuum," he waxes philosophic, "but by the same token, instrumental music on this level doesn't get its rightful exposure, and there are several generations of listeners who haven't ever heard this kind of music before. They want to hear what the band sounded like, not something new. Good wine is good wine; you don't worry about the vintage."