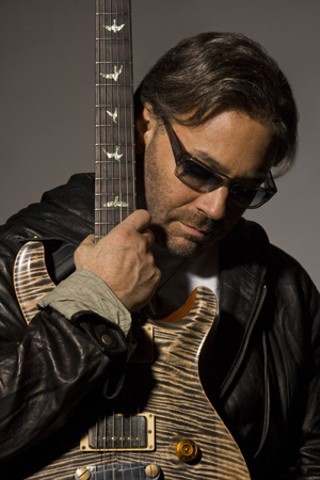 Somewhere from deep inside the recesses of Siberia, guitarist Al Di Meola transmits a cyber communiqué.

"I've been on an extensive Russian tour!" he types, exclamation points firing on all cylinders. "For some reason my music is very popular in Russia! Audiences are very warm even though the outside temperatures are quite cold in May!"

"I was 19 years young [when I joined]!" exclaims Di Meola. "It was a dream come true solely on the basis that RTF was my favorite group prior to joining. The early training I had enabled me to handle those killer charts Chick had written, but the experience was mind-boggling! I was still sort of a baby thrown in the deep water. I loved it!"

Oh baby and how. Di Meola's brief tenure in Corea's intergalactic overdrive, 1974-1976, proved the perfect launching pad for his solo debut, Land of the Midnight Sun, and its 1977 successor, Elegant Gypsy, both of which splashed over onto the wave of Edward Van Halens hatching everywhere. Then came the paradigm shift.

"Around 1980 I made a radical shift towards primarily acoustic-oriented world music," writes the seminal shredder. "Occasionally I stepped back into the electric arena, but back then I was a pretty sizable selling artist for CBS and I know they were concerned that I wanted to go acoustic when I was at the door of crossing over into an arena type jazz-rock act. However I stuck to this vision and pulled together with Paco de Lucia and John McLaughlin. [Friday Night] sold four million copies! Three acoustic guitars!"

The rest, as they say, is a Siberian hotbed of fandom. In far-flung corners of the planet, describing Chick Corea remains a universal exercise in language.

"One of the most under-celebrated and treasured composers of our time," gushes Di Meola. "If this were a foreign country his picture would adorn local currency! Also one of perhaps the three most amazing pianists of our time and my favorite for reasons that have influenced myself and a whole generation."

Favorite guitar album: Hendrix debut Are You Experienced. Previous lifetimes define most axe-men, and Al Di Meola continues blazing that eternal flame. "I was just a teenager [when I joined RTF]. "Now, I have 30 more years of development to unleash!"